WCRH is a Religious station from Williamsport, Maryland. 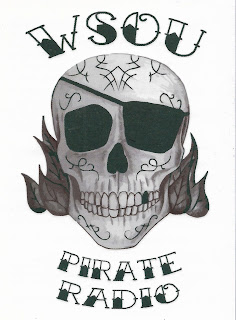 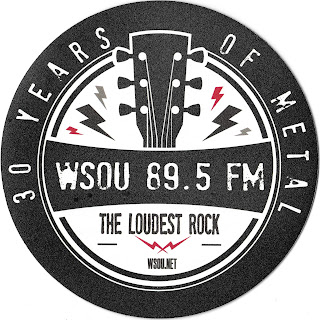 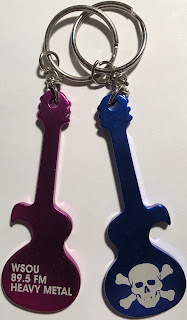 WSOU is the student-run, campus radio station for Seton Hall University in South Orange, New Jersey. Their format includes Hardcore, Heavy Metal, Punk and other sub-genres of Modern Active Rock. WSOU went on the air in 1948, first started playing Rock music in 1969, and have carried the Hard Rock format since 1986. Seton Hall is a private Roman Catholic university so, in an interesting bit of counterprogramming (and to help wash away all that devil music) WSOU's HD2 format is all-Catholic including Daily Mass and blocks of Christian Rock. 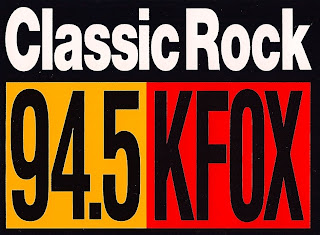 98.5 "K-FOX" is a Classic Rock station licensed to San Jose, California. KUFX began at 94.5 FM before moving to 104.9 and finally landing at 98.5 FM. They also now simulcast on KUZX 102.1 FM for better coverage in San Francisco. Musician Greg Kihn is currently doing mornings at K-FOX.

KOMP is an Active Rock station from Las Vegas, Nevada. Click here for another KOMP decal. 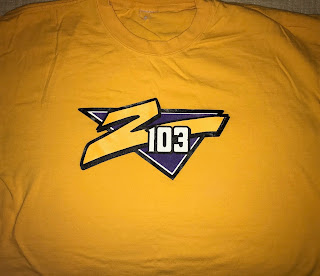 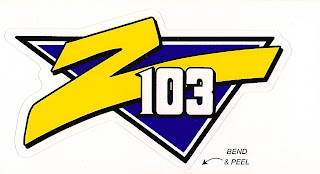 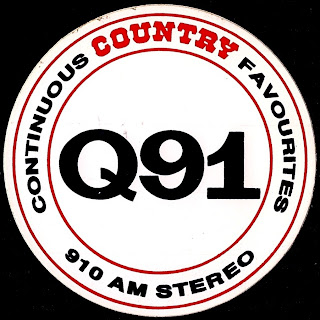 "Q91" CKDQ is a Country station licensed to Drumheller, Alberta near Calgary. 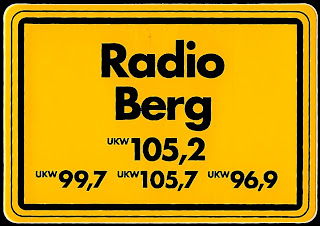 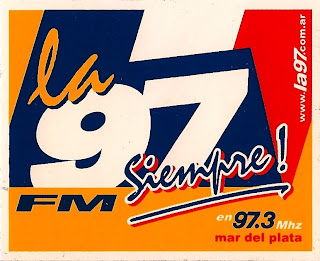 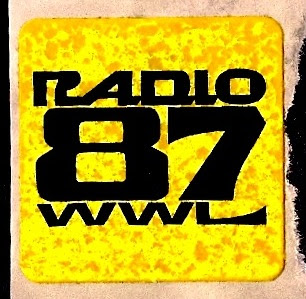 870 AM WWL (World Wide Loyola) is a News/Talk station from New Orleans, Louisiana. They were put on the air by Jesuits at Loyola University of New Orleans in 1922. 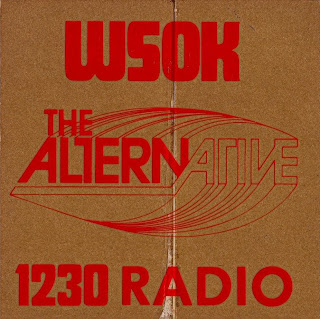 WSOK is a Gospel station from Savannah, Georgia with a long history of serving the African-American community. A 1974 article in Black Enterprise magazine states that the new owner was "to shift the station's emphasis from R-and-B and gospel to jazz and classical pieces performed by black artists." A 1980 Broadcasting Yearbook simply stated their format as Diversified and listed them as belonging to the Mutual Black Network. 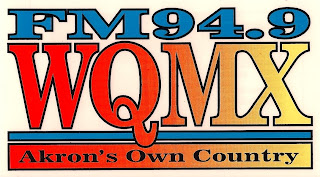 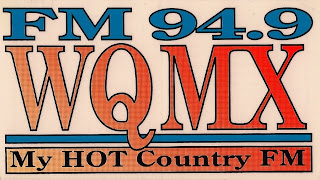 I saw one of these WQMX stickers on a car in Columbus, Ohio while driving to see the Buffalo Bisons play the Columbus Clippers. I'm not sure which decal it was as they look very similar and my friend Jeff would like to point out that I "nearly got us killed" trying to get a good look at it while speeding on Interstate 70. 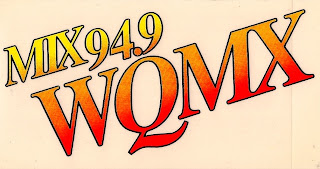 Here's an older WQMX sticker from their days as an Adult Contemporary station between 1988 and 1993. WQMX is currently a Country station licensed to Medina, Ohio near Akron.

WMPG (W Maine Portland Gorham) is a block-programmed Variety station licensed to Gorham, Maine. They broadcast from the campus of the University of Southern Maine-Portland using a combination of students and community volunteers. WMPG officially went on the air in 1973 after being a carrier current station for three years prior.

WHIN is a Country station from Gallatin, Tennessee near Nashville. Anybody know what "Love That Wave" was referring to?

WBMX (W Black Music EXperience) was an Urban Contemporary station in Chicago, Illinois from 1975 to 1988. They also carried a highly influential Saturday night dance show hosted by the Hot Mix 5 which led directly to the creation of House Music. The city of Chicago even named a downtown street after them. 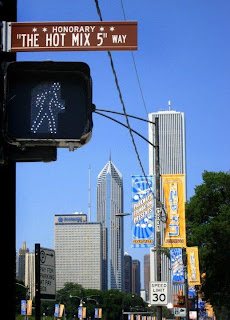 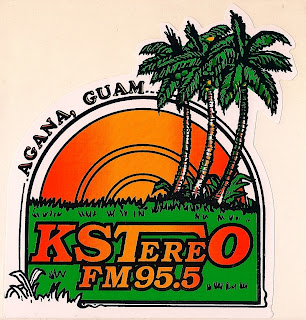 KSTO is an Adult Contemporary station from Agana, Guam.

KMHK "95.5 The Hawk" was a Classic Hits station from Hardin, Montana. 95.5 FM is currently "News Radio 95" KCHH while the KMHK calls, mascot and format have moved to 103.7 FM licensed to Billings, MT.

KDHN is a Country station licensed to Dimmitt, Texas. This sticker dates from around 1982 according to this list of Coca-Cola slogans. 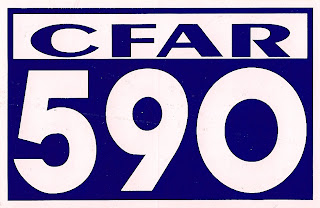 CFAR is an Adult Contemporary station from the wonderfully named Flin Flon, Manitoba.
Flin Flon is split by the border of two provinces, with about 6,000 residents living in Manitoba and a few hundred living in Saskatchewan. The city was named for Josiah Flintabbatey Flonatin, a character in the book The Sunless City who piloted a submarine through a bottomless lake then passed through a hole lined with gold and entered into a mysterious world. A prospector discovered a rich vein of copper in the area and named it Flin Flon's Mine and the town that grew around the mine adopted the name.
A statue of Josiah Flintabbatey Flonatin stands in the city overlooking the perimeter of the Flin Flon Tourist Park. "Flinty" even had his own $3.00 coin which was considered legal tender within the city during its first year of issue. 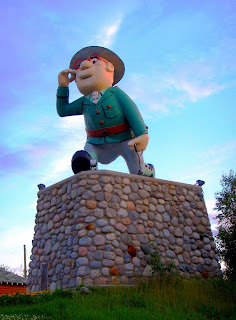 Spreeradio 105.5 started out with an Easy Listening format but now would be considered something like a Classic Hits station. They broadcast from Berlin, Germany.

I started collecting radio station bumper stickers in the mid 1980s, but it wasn't until 1997 that the amount of decals in the collection really started to grow significantly. That year I got internet access which made contacting radio stations cheap and easy. Up until then I was blindly sending out self-addressed stamped envelopes and hoping I got something back. Now I could email the station to see if a sticker was available and usually they mailed it right to me if I asked nicely (sometimes with other station goodies as well.) Around this time, my feeble mind decided it would be a good idea to stick a bunch of decals to large sheets of poster board. I filled up 26 of these boards which, at an average of 55 stickers per board, means I "wasted" 1,430 radio station bumper stickers. I even went so far as to get a sheet of plexiglass to display window and static stickers but then thought better of it. While I still technically own these stickers, and the boards look pretty cool, I wish I had them in their intact form. Like a giant puzzle, it was a real challenge finding and placing the stickers to fit the board perfectly. Here's the first sheet of stickers--click it for a closer view. I'll post the other 25 boards in the coming months. 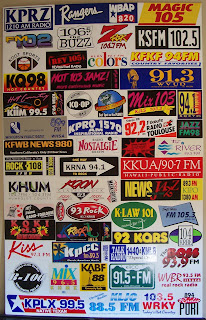 4BCR "Coral Coast Radio" is a community broadcaster from Bundaberg, Queensland, Australia. They have a variety of block formatted programming including Rock, Jazz, Blues, Country, Easy Listening and Ethnic.