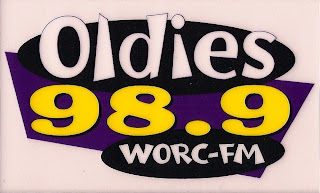 The dart this time landed just west of North Woodstock, Connecticut. Oldies WORC (WORCester, MA) is licensed to nearby Webster, Massachusetts.
Posted by Greg at 2:43 PM No comments:

Reggae 97.3 was one of only 5 radio stations on the British Virgin Islands. The website URL on the sticker no longer works and I believe they're now broadcasting under the name Z-Wave although it's unclear what the format is. Most likely the only sticker from a full-time reggae station in my collection.

The founder of this station contacted me (see comments) and emailed a photo of a slightly different Reggae 97.3 sticker.  Thanks John!
Posted by Greg at 5:36 AM 1 comment:

I pulled this sticker randomly from the collection and realized I have no information about it in my records. A quick Google search shows that it may be from Puyallup, Washington but I don't have time to confirm it yet.
UPDATE:  See comments.  Thanks Dan!
Posted by Greg at 5:33 AM 2 comments: 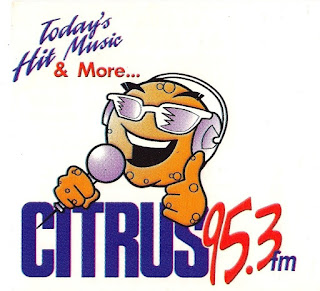 "Citrus 95.3" WXCV is a CHR station licensed to Homosassa Springs, Florida.
Posted by Greg at 5:30 AM No comments: 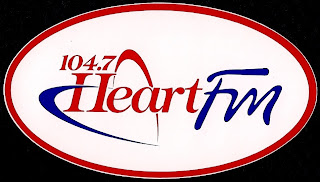 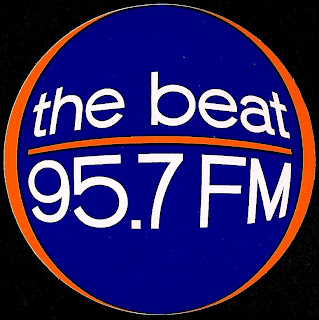 KRVV - Bastrop, Louisiana
Posted by Greg at 8:31 AM No comments:

Freeform student radio from Emerson College in Boston, Massachusetts. The station was built using Army surplus radio gear and went on the air in 1947. They were the first commercial college radio station in the country but are now a more traditional non-commercial outlet.
Posted by Greg at 10:10 AM No comments: 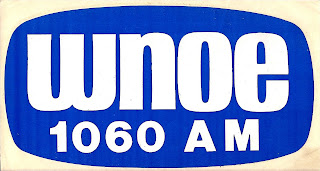 WNOE (named after its original owner, former Louisiana governor James A Noe) was New Orlean's first Top 40 station, lasting from the 50s through the late 60s. For a few years they went MOR and Oldies but found success with "Real Rock" in 1973 while simulcasting with their sister station WNOE-FM. 1981 brought a Country format which remained until 1995 when they were sold, found Religion, and changed calls to WLNO.

99.1 The Bandit was a Classic Rock station serving El Paso, Texas and licensed to Presidio, Chihuahua Mexico. They changed their slogan to 99.1 The Eagle in 2006 but currently are Silent.
Posted by Greg at 5:57 AM No comments:

Today's dart landed in the southernmost part of Skaneateles Lake, one of 7 (or 11 depending on how particular you want to get) bodies of water that make up New York's Finger Lakes Region.
WXHC is an Oldies station licensed to nearby Homer, New York.
Posted by Greg at 11:48 AM 2 comments: 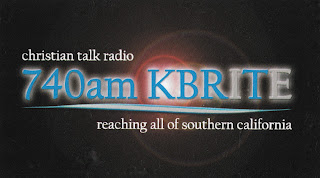 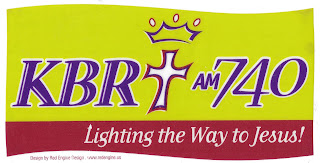 KBRT is a Christian Talk station in Los Angeles, California.  They operate only during daylight hours and sign off at sunset each day to comply with their Class D license. In May, 2007 contractors working on a KBRT antenna caused a 4,200 acre wildfire while cutting into steel cable with a gas-powered saw. "KBRITE" is licensed to Avalon, CA located on Santa Catalina Island about 22 miles off the coast of Los Angeles.
Posted by Greg at 6:11 AM No comments: 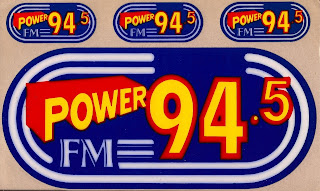 If you know what station this sticker is from, don't keep it to yourself.
Posted by Greg at 5:19 PM 1 comment:

National Public Radio was created in 1970 after Congress passed the Public Broadcasting Act of 1967. Their first broadcast was in April 1971, covering the Senate hearings on the Vietnam War. There were 90 public radio stations as charter members and currently there are 797 stations using their programming. Their funding is a mixture of private, government and philanthropic support.  NPR is based in Washington, DC.

My dad was a Navy pilot stationed in Pensacola although I think he may have already left the service by the time I was born in nearby Milton in 1970.  I have no memory of the place as we moved away when I was about a year old.

WXBM has been a Country music station since they went on the air in 1964. It is licensed to Milton, Florida.
Posted by Greg at 5:41 AM No comments:

CBS Radio has decided to blow up 97.1 FM Talk in favor of Top 40 "AMP Radio" starting tomorrow at 5 PM. I'll miss listening to the Adam Carolla Show podcast and hope he reappears at another station soon. Carolla had the unenviable task of taking over for Howard Stern in Los Angeles after he bolted for Sirius Satellite Radio. The above stickers are from when the station was using the "Free FM" branding. In 2007 the station added the dreadful Danny Bonaduce to the morning show which stunk it up for an entire year. In protest, Carolla was a no-show on his own program until Bonaduce was moved to another timeslot. KLSX (KLaSiX-in reference to an earlier Classic Rock format) is licensed to Los Angeles, California.
Posted by Greg at 5:31 AM 1 comment:

The Voice of America is the official broadcasting wing of the United States government. They are currently heard in 46 languages but this varies depending on government priorities and the world situation. VOA broadcasts by satellite TV, AM, FM and shortwave frequencies as well as voanews.com.
This sticker was too large to scan so I had to use a crappy photograph.
Posted by Greg at 5:36 AM No comments: 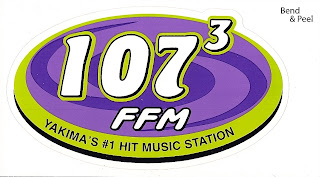 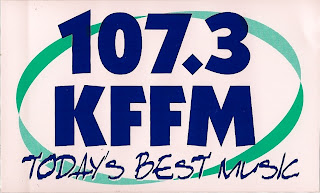 I've decided to occasionally throw a dart at a map of North America and display the closest station that I have a sticker from. Three throws landed in the Pacific Ocean before one finally landed on the Saddle Mountains of south central Washington state.
KFFM is a CHR station licensed to Yakima, Washington.
Posted by Greg at 8:41 AM 1 comment: 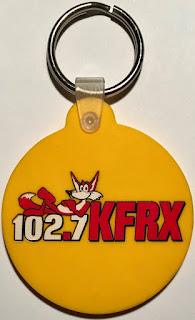 KFRX is a long-time CHR station from Lincoln, Nebraska. Around 2006 they moved up the dial to 106.3 where they currently reside.
Posted by Greg at 11:02 AM No comments:

KEFX is the flagship station of the Effect Radio Network which plays Modern Christian Rock. Their programming is relayed by 53 broadcast translators mostly in the Pacific Northwest and California but also down into Texas and Oklahoma. KEFX is licensed to Twin Falls, Idaho.

Another season of futility begins for my Baltimore Orioles. It's tough when you're in the same division as the Yankees and Red Sox and you haven't made the post-season since 1997. Eleven consecutive losing seasons doesn't make you optimistic but maybe we'll be the Rays of last season....yeah right.

WTOP (the TOP of the AM dial) was a News station licensed to Washington, DC. The WTOP calls still exist in DC at 103.5 FM while 1500 AM is now WFED.

WWNH was a Contemporary Christian/Religious Teaching station licensed to Madbury, New Hampshire. Oh, and as so often happens, the operator was a convicted felon who occasionally ran the station while unlicensed.
Posted by Greg at 7:25 AM No comments:

Radio Melodie is a pop music station located in Sarreguemines, France. They broadcast in French and German as they're located on the border of both countries. Sarreguemines was transferred to Germany after the Franco-Prussian War but returned to France after World War I.
I listened to their variety of lightweight Euro-pop online until they played "Celebration" by Kool & the Gang. It's nice to know that this horrible, overplayed song knows no borders.
Posted by Greg at 6:58 AM No comments:

Attack of the Killer B94s

WONB is a CHR station owned by Ohio Northern University in Ada, Ohio.

WBZZ - Pittsburgh, Pennsylvania. This sticker is from when they were a CHR station before flipping to "K-Rock" and adding Howard Stern. They then switched briefly to Talk as WTZN "The Zone" before coming full circle as B94 again with WBZW as their calls.

CHBW is a Hot AC station licensed to Rocky Mountain House, Alberta.
Posted by Greg at 7:10 AM 2 comments:

1070 AM KHMO is a News/Talk station licensed to Hannibal, Missouri. They began broadcasting in 1941.
Posted by Greg at 5:37 AM No comments:

750 AM KAMA is a Regional Mexican station licensed to El Paso, Texas.

This looks to be from the mid-80s because of the obvious Eddie Van Halen-ish guitar and the Walkman headphones. No coupons or advertising on the back. Any idea where this goofy sticker is from?
UPDATE: This sticker is from WFYV (now known as "Rock 104.5") in Jacksonville, Florida and licensed to Atlantic Beach, FL. Thanks for the info Kevin!
Posted by Greg at 12:22 PM 1 comment:

WFSO (W Five Seven O) started up in 1966 as an MOR station before giving way to Rock by the 1970s. In 1978 the station was sold and switched to Talk as WPLP. WFSO was licensed to Pinellas Park, Florida.
Posted by Greg at 12:02 PM No comments: