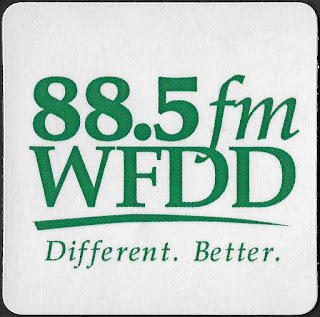 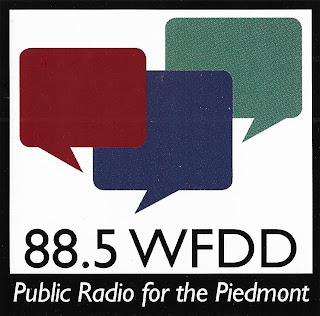 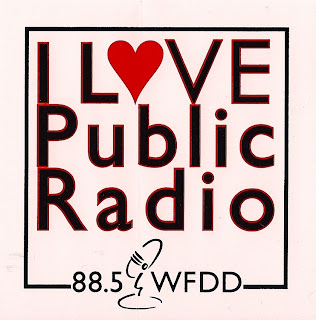 WFDD (Wake Forest Demon Deacons) grew out of WAKE, a 5-watt pirate station operated by Wake Forest University students around 1946. By the end of the decade they had become fully licensed but had to change calls to WFDD because WAKE was already taken. In 1971 WFDD became a charter member of National Public Radio and relies on NPR for much of its programming today. They also broadcast Jazz and Classical music along with BBC News. WFDD is licensed to Winston-Salem, North Carolina.
Posted by Greg at 8:47 AM 1 comment:

WSHP (WrocketSHiP) is a Classic Rock station from Lafayette, Indiana and licensed to Attica, IN. Prior to this, "The Rocket" was a Modern Rock station as WGBD. Bob & Tom are a syndicated morning show heard on about 140 affiliates nationwide.
Posted by Greg at 9:33 PM No comments:

My buddy Dan Sys in Vancouver was kind enough to send one of his many radio stickers along with a bit of station information. Take it away Dan...

Z Rock 1590 is KZOK Seattle from 1990. At that time they split away from a KZOK 102.5 simulcast and carried the syndicated Z-Rock programming from Dallas. That lasted a few years until they became KPOZ with a "positive" Christian format. Today they are KLFE (K-LIFE) with a mixture of Russian programming and Christian Talk. Call letters and formats before the KZOK days included KQUL (Oldies), KJET (Alternative), KUUU (Oldies), KSND (Top 40), KETO (MoR) and originally signing on as KTIX back in the late 50's.

Greg here again. I remember Z Rock very well from listening to Cincinnati's affiliate which came in strong in Dayton. One of my favorite bits was when they played songs backwards or sped up and you had to guess what it was. It was the glory days of hair metal and these guys played it all. By the way, "Hey Stoopid" refers to the album by that name that Alice Cooper released in 1991.
Thanks Dan!
Posted by Greg at 8:31 PM No comments:

This time the random dart landed on Route 7 just north of Abbeville, Mississippi.

WOXD is a Classic Hits station focusing on Rock and Soul from the 60s, 70s and 80s. Bullseye 95.5 is licensed to Oxford, Mississippi, just south of Abbeville.
Posted by Greg at 3:41 PM No comments:

The King of Pop died yesterday. It's one of those major, unexpected deaths that you remember where you were when you found out. Like many people, I wasn't a huge Jackson fan but could appreciate his obviously immense talent even as he descended into freakish and possibly illegal behavior. Unfortunately, that talent seemed to fade about as fast as his skin color over the years. For the past day I've been hearing MJ songs played on the radio that I haven't heard in years ("State of Shock" anybody? I think I'm the only one who likes this song) and watching him do the still-amazing Moonwalk on YouTube. So sad.

I don't have any directly King of Pop-related radio stickers so these will have to do....

Sacramento, California's KPOP FM had a variety of formats over the years including Middle-of-the-Road, Soul, Modern Rock and Top-40. Not sure when this sticker is from but I have a feeling it's from their MOR days. 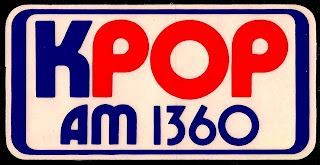 KPOP AM was an Adult Standards station from San Diego, California. AM 1360 now has a Sports Talk format with the awesome call letters KLSD.
Posted by Greg at 9:41 PM No comments:

Braidwood Community Radio was?/is? located in Braidwood, New South Wales, Australia. 2BW doesn't appear to exist anymore or at least have any kind of web presence. The above sticker is circa 2004.
Posted by Greg at 8:59 AM No comments:

WLLH (W Lowell Lawrence Haverhill) has been on the air since 1934, originally at 1370 AM and now 1400 AM.
In the 1940s Ed McMahon began his broadcasting career with a job at WLLH. He was best known as Johnny Carson's announcer and sidekick on the Tonight Show from 1962 to 1992. McMahon passed away yesterday at age 86.
In 2005 the station became an ESPN Radio affiliate. WLLH is licensed to Lowell, Massachusetts.
Posted by Greg at 9:34 PM No comments:

June is National Rose Month but I'm pretty sure National Rose Day doesn't really exist. I can only find two websites that mention June 23rd as NRD--one is a highly dubious Yahoo! Answers webpage and the other is a nutrition calendar. Who cares. For the purposes of this blog, I officially declare today National Rose Day across the land. 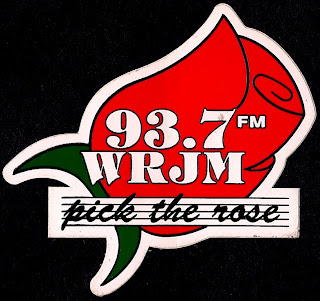 WRJM was licensed to Geneva, Alabama. They ran a Beautiful Music (I think) format as "The Rose" before switching to News/Talk around 2002. 93.7 FM is now "Kickin' Country" WUSD.
Posted by Greg at 9:30 PM 1 comment:

KUER (KUtah Educational Radio) is a public radio station from the University of Utah in Salt Lake City. They broadcast a lot of the usual National Public Radio programming along with local news and Jazz music at night. KUER operates the largest terrestrial translator system in the United States with 33 translators broadcasting throughout Utah, New Mexico, Arizona and Idaho.
Posted by Greg at 8:06 AM No comments: 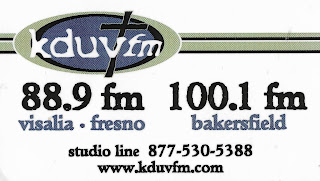 At one time they also operated K262AD, a translator licensed to Bakersfield, CA. They still have one there although it seems to have moved to 100.1 FM.
Posted by Greg at 9:12 PM No comments: 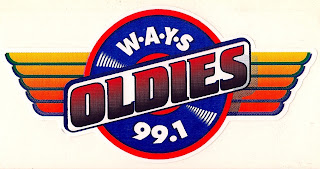 WAYS was an Oldies station licensed to Macon, Georgia. They eventually moved up the dial to 105.5 before leaving the FM dial altogether. 99.1 now runs a Country format as WDEN.
Posted by Greg at 5:41 PM No comments:

WYMR was licensed to Sebring, Florida circa 1995. Anybody know what the format of this station was?
Posted by Greg at 5:55 PM No comments:

WVOX is primarily a News/Talk station licensed to New Rochelle, New York. Almost everything heard on WVOX originates locally including shows produced by citizens and interest groups. The station lineup has been described as a "glorious hodgepodge," much of which the owner of the station can't even get excited about--everything from a travel show to Bible teaching to a weekly discussion with the mayor. There's even a thrice-weekly heavy metal show hosted by the son of the station's president.
Posted by Greg at 9:20 PM No comments: 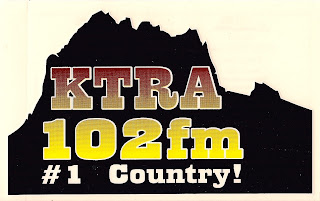 KTRA is a Country music station licensed to Farmington, New Mexico.
Posted by Greg at 8:10 PM No comments: 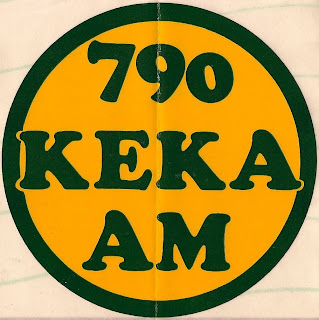 KEKA was from EureKA, California. No idea what the format was but 790 AM is now News/Talk KWSW.
Posted by Greg at 8:08 PM No comments:

I was hoping to make a quick and easy post today but picked a really confusing sticker.
The Rock 107.1 website says this is from KJML although radio-locator.com doesn't have an entry for a station with those call letters. Wikipedia says KJML is licensed to Baxter Springs, Kansas but another website says the only station with that city of license is KCAR located at 104.3. KBZI-Deerfield, Missouri was supposed to move frequencies from 100.7 to 107.1 but it's unclear if that ever happened or if the calls would travel with them. I'm too lazy and tired to figure this one out.....picked a bad week to let my always-accurate 100000watts.com subscription to lapse.
Posted by Greg at 2:44 PM 12 comments:

WRJO is an Oldies station licensed to Eagle River, Wisconsin.
Posted by Greg at 8:50 PM No comments:

"The Vision" were simulcast Rock stations licensed to Dyer and Humboldt, Tennessee.
Posted by Greg at 6:39 PM No comments: 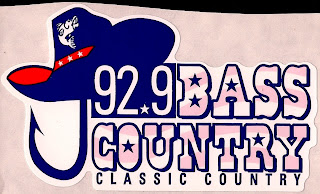 "92.9 Bass Country" KOMG was a Classic Country station licensed to Ozark, Missouri
Posted by Greg at 9:24 PM No comments:

WRKT (WRocKeT - a reference to the NASA Space Center in nearby Cape Canaveral) was a Classic Hits station licensed to Cocoa Beach, Florida. The above sticker is circa 1985 after they had switched from a Country format and before they flipped to Oldies in 1987. 1300 AM is now News/Talk WMEL.
Posted by Greg at 3:08 PM No comments: 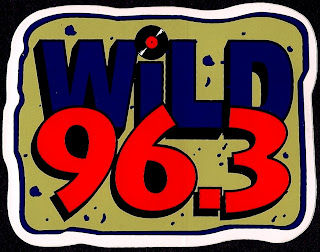 WHTD (see yesterday's sticker) decided to add more upbeat pop, dance and hip-hop to their playlist and became WNHT "Wild 96.3" in 2004. They stunted before the impending format shift by playing "Wild Thing" by Tone-Loc non-stop.
Posted by Greg at 2:52 PM No comments: 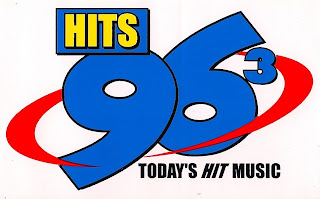 WHTD was a Top-40 station in Fort Wayne, Indiana. 96.3 FM began as an Adult Standards station in 1994 before switching to Modern Rock WEJE "The Edge" in 1995. A flip to Country with the calls WWWD followed in 2001 before becoming "Hits 96.3." WHTD was licensed to Churubusco, Indiana.
Posted by Greg at 7:51 PM No comments: 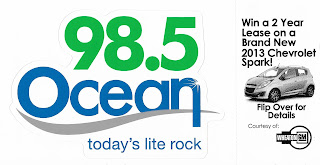 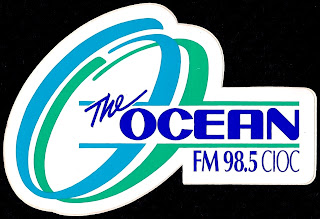 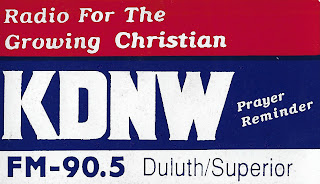 90.5 FM KDNI is a Religious Teaching/Contemporary Christian station in Duluth, Minnesota. Despite the KDNW calls on this magnet and sticker, they're actually from sister station KDNI.  KDNW also operates 6 translator stations in Minnesota, Wisconsin and Michigan.
Posted by Greg at 9:26 PM No comments: 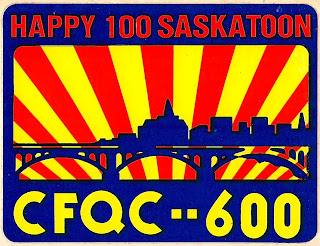 CFQC's history in Saskatoon, Saskatchewan goes back to 1920s. They switched frequencies a few times in their ealy years, from 910 to 840 and then landing at 600 AM in 1941. From 1944 to 1962 CFQC was an affiliate of the CBC Dominion Network. During this time the station also became co-owned with CFQC-TV and shared their broadcasting facilities and staff. As with many Canadian AM stations, CFQC eventually moved to the FM dial, becoming "Hot 93" in 1995. They are currently known as "92.9 The Bull" with the call letters CKBL.

Today marks the 20th anniversary of the Tiananmen Square massacre in Beijing, China. Anti-government protesters had been meeting in the square for seven weeks, initially to mourn the death of pro-democracy, anti-corruption official Hu Yaobang. On June 4th, 1989 the Chinese military took action to clear the square and began firing assault rifles from armored personnel carriers into the crowds. No one knows for sure how many died--the official Chinese number was 186 but estimates from other sources go as high as 10,000. 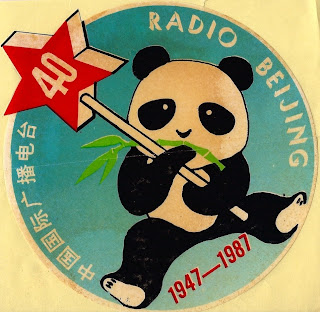 Radio Beijing is the former name of China Radio International which is that country's external radio service. It covers the world using more than 50 shortwave transmitters. 1120 AM WUST in Washington, DC and 1540 AM WNWR in Philadelphia, Pennsylvania also carry English-language CRI programming.
Posted by Greg at 9:39 PM No comments: 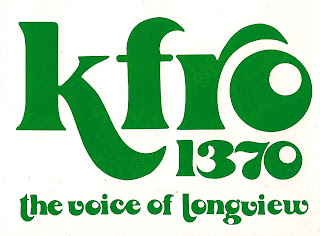 KFRO (Keep Forever Rolling On) has been broadcasting from Longview, Texas since 1935. They've carried a Country/Roots Music format since at least the 1950s and was owned by the same family for 63 years until it was sold in 1998. Currently KFRO runs a Classic Country format simulcast with their sister stations KKUS and KCUL under the branding "The Ranch."
Posted by Greg at 9:22 PM No comments: 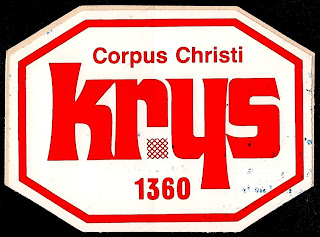 Not sure what the format was for KRYS-AM but the current KRYS-FM in Corpus Christi, Texas is Country so there's a good chance the AM was as well. It was a Radio Disney outlet long after this sticker was printed which has a 1970s look to it. 1360 AM is now KKTX, a News/Talk station.
Posted by Greg at 9:26 PM 8 comments: 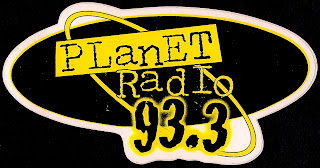 The back of this sticker says WAIA which must have been the old calls for what is now WPLA "Planet Radio 107.3," a Modern Rock station licensed to Green Cove Springs, Florida. The AIA refers to Florida State Road A1A which runs from Key West in the south all the way north along the Atlantic Ocean to Callahan near the Georgia border (which was also the city of license for WAIA.)
Posted by Greg at 9:30 PM No comments: