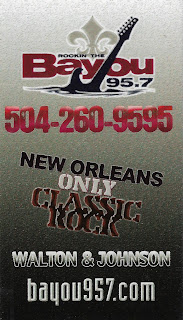 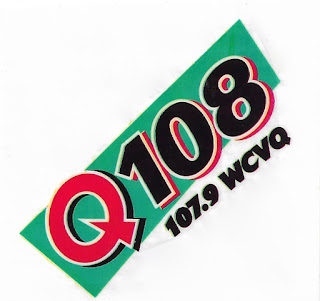 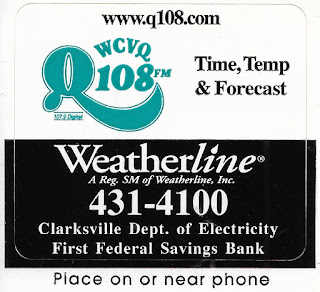 WCVQ "Q108" is a Hot Adult Contemporary station licensed to Fort Campbell, Kentucky.  Although their target market is Clarksville, Tennessee, the 100,000-watt station boasts coverage into Nashville about 40 miles to the southeast.  "Q108" has carried the same format since 1986.
Posted by Greg at 5:39 PM No comments: 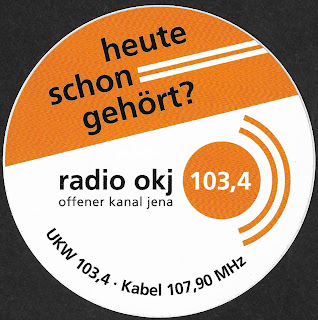 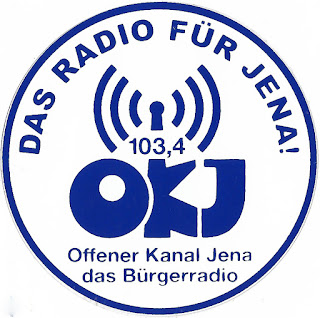 103.4 FM Radio OKJ has been broadcasting from Jena, Germany since 1999.  Their translated Wikipedia page describes them as a "club-owned local radio station" as well as an "open radio channel." 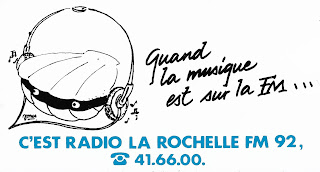 Radio La Rochelle began broadcasting in October 1981 at 92.0 FM in La Rochelle, France.  They later became part of the Europe 2 network of stations which then all became Virgin Radio.
La Rochelle is on the western coast of France and is essentially built around its harbor.  The oyster (or clam? or mussel? I'm not sure...) shown on the sticker might have been a nod to the city's waterfront location.

"KF 99" WWKF is a CHR station licensed to Fulton, Kentucky.  They are also simulcast on "KQ 105" WAKQ licensed to Paris, Tennessee. 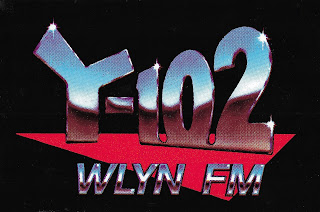 1360 AM WLYN went on the air in Boston, Massachusetts in December 1947.  They currently air leased-time Ethnic programming.  101.7 WLYN FM followed in 1963 and eventually became "Y102" (later WFNX,) one of the first Modern Rock stations in the country.  Both stations are/were licensed to (W) LYNn, MA. 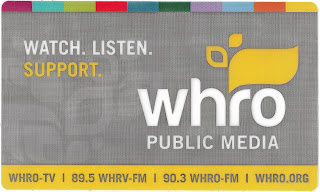 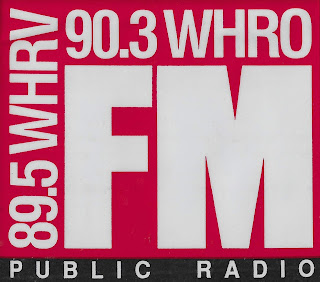 1060 AM WAMT broadcast to Florida's Space Coast region from 1979 until 2000.  During that time they carried various formats including Country, Oldies and Talk.  WAMT was licensed to Titusville, FL. 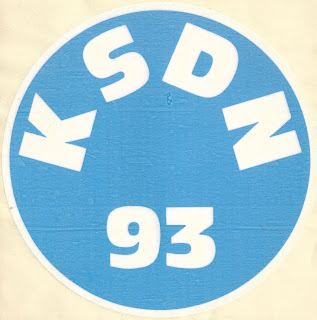 930 AM KSDN is a News/Talk station licensed to Aberdeen, South Dakota.  They began broadcasting in 1948.

WPAE and KPAE are simulcast Religious stations licensed to Centreville, Mississippi and Erwinville, Louisiana respectively.  "Sound Radio" are owned by the (W/K) Port Allen Educational Broadcasting Foundation and went on the air in September 1985.
Posted by Greg at 9:07 PM No comments: 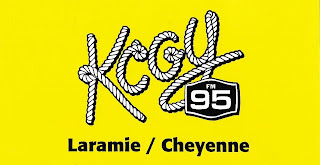 95.1 KCGY is a Country station licensed to Laramie, Wyoming.  The call letters reflect the former owner (K) Curt GowdY, a sportscaster known as the longtime voice of the Boston Red Sox as well as working for NBC and ABC Sports.  Gowdy bought his first radio station in 1963 and eventually owned stations in Massachusetts, New Hampshire and Florida as well as his native Wyoming. 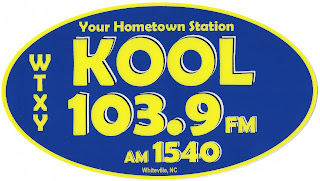 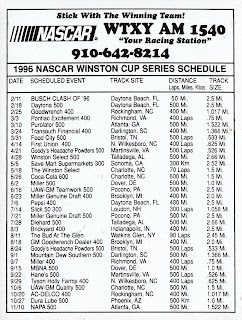 Stickers and a NASCAR schedule magnet from AM 1540 WTXY in Wilmington/Whiteville, North Carolina.  The Classic Hits station is also heard on translator station W280FO and branded as "Kool 103.9". 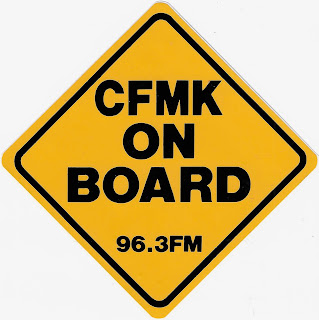 96.3 FM CFMK was a Country station in Kingston, Ontario for almost 30 years starting in the late 1970s.  They currently air a Classic Hits/Classic Rock format branded as "Big 96.3".
Posted by Greg at 8:43 PM No comments: 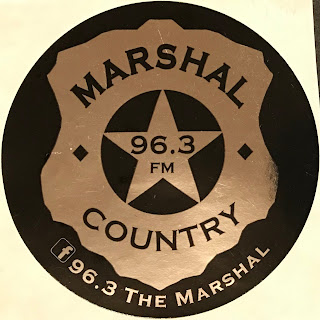 KERP "96.3 The Marshal" is a Country station licensed to Ingalls, Kansas. 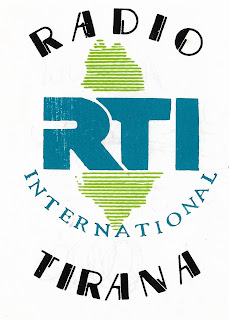 Radio Tirana International is the worldwide arm of Albania's public broadcaster Radio Televizioni Shqiptar.  They ceased emissions on short wave and medium wave in 2017 but continue with satellite and internet broadcasts. 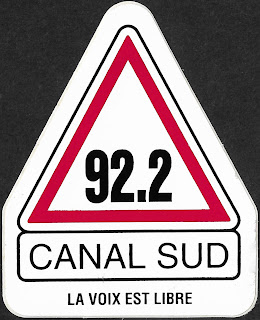 Canal Sud is an independent, non-commercial radio station broadcasting from Toulouse, France.  They began broadcasting in 1976 as a pirate station but became legal in 1981, the year radio in France stopped being a state monopoly.

107.1 WTTX plays Gospel music in Appomattox, Virginia.  They are now part of the Joy FM network of about 30 stations located in five southern states. 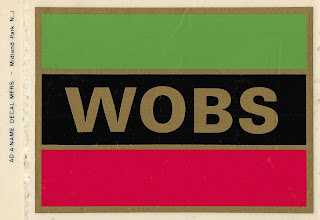 1360 AM WOBS was a daytime-only station in Jacksonville, Florida.  They played R&B and Gospel music beginning in the early 1950s.  This music survey shows they had this format until at least 1972. 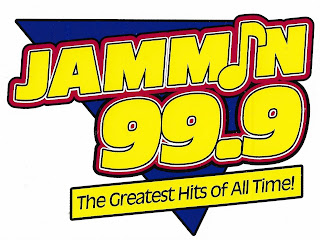 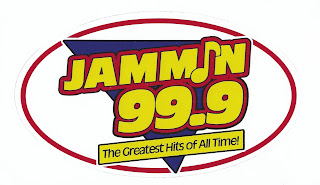 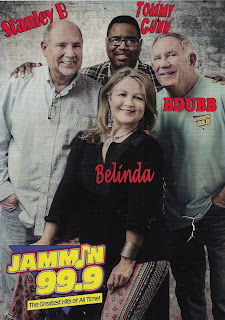 "Jammin 99.9" WKXB is a Rhythmic Oldies station in Wilmington, North Carolina.  Around the mid-2000s they were the Oldies outlet "B99.9".  Another WKXB sticker can be seen here.
Posted by Greg at 7:51 PM No comments: 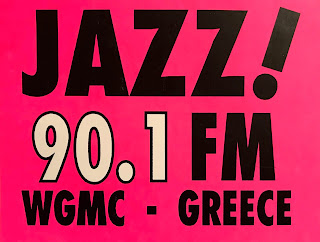 Rochester, New York's 90.1 FM WGMC is a non-commercial radio station airing a Jazz format.  The 15,000-watt community station went on the air in 1972.  WGMC is licensed to Greece, NY and is owned by the Greece Central School District.

"B103.9" WBZX is a 1980s-centric Classic Hits station licensed to Big Rapids, Michigan.

97.1 KYAL airs a Sports format in Muskogee/Tulsa, Oklahoma.  The Sports Animal's 100,000-watt signal covers most of the eastern part of the state.

KREW AM and FM were licensed to the city of Sunnyside in south central Washington state.  I don't know what year this sticker is from but the 1990 Broadcasting Yearbook lists KREW FM as having a Middle-of-the-Road format while the AM half played Country music.
Posted by Greg at 1:06 PM No comments: 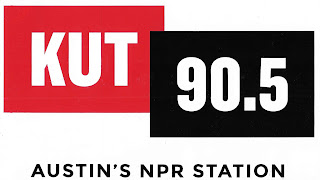 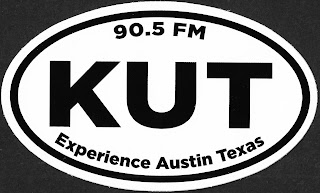 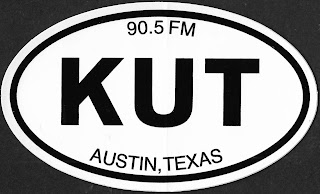 90.5 FM KUT is a public radio station operated by the (K) University of Texas in Austin.  The National Public Radio-affiliated broadcaster mostly airs NPR programming along with some local content as well as BBC World Service news during late night/early morning hours.
Another KUT sticker can be seen here. 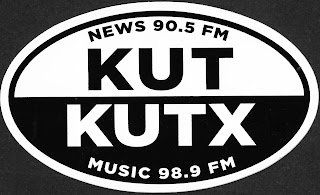 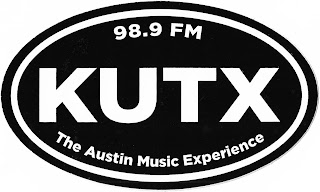 Sister station 98.9 KUTX plays Adult Album Alternative music branded as "The Austin Music Experience." KUTX used to simulcast KUT and was located at 90.1 FM before the University of Texas sold it to Texas Tech University where it  became KNCH.
Posted by Greg at 8:33 PM No comments: 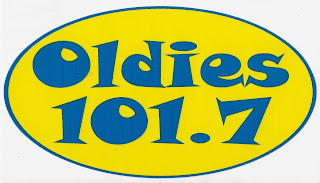 630 AM KLEA began broadcasting on Christmas day 1952 in Lovington, New Mexico.  Sister station KLEA 101.7 FM followed in October 1965.  According to Wikipedia, both stations ceased operations, surrendered their licenses to the FCC and shut down in 2017.