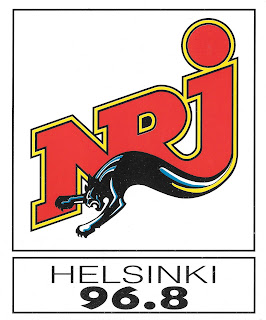 Energy/NRJ plays Contemporary Hit Music in Helsinki, Finland.  Their website makes no mention of the 96.8 FM frequency.  It's unclear if they still broadcast there or if Finland, like their neighbor Norway, has dropped FM and converted completely to Digital Audio Broadcasting.
Posted by Greg at 3:53 PM No comments: 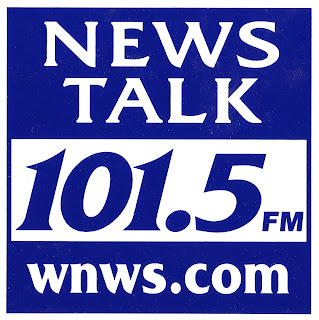 101.5 WNWS carries a News/Talk format in Jackson, Tennessee.
Posted by Greg at 5:41 PM No comments:

WKTS is a Contemporary Christian station licensed to Kingston, Tennessee.  They are now known as "90.1 The Bridge".

WGH "97.3 The Eagle" plays Country music in Newport News, Virginia.  They went on the air in 1948 and are grandfathered in at a whopping 74,000 watts.  The call letters stand for World's Greatest Harbor because of the area's large shipbuilding industry as well as commercial and military ports.

"V104.9 FM" WBUV was an Urban station licensed to Moss Point, Mississippi.  When Hurricane Katrina hit in 2005, WBUV began to broadcast news and information 24/7 to keep the community updated on recovery efforts in the area.  They have remained a News/Talk station ever since. 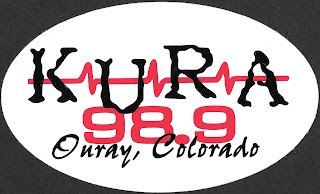 98.9 KURA is a low-power FM station licensed to (K) OURAy, Colorado.  The 100-watt station is managed and produced by students at Ouray High School and went on the air in 2002.

101 KRCK was a short-lived ('83-'85) Rock station in Portland, Oregon.  Format flips to Classical then Jazz preceded a flip back to Rock as KUFO.
Posted by Greg at 7:33 PM No comments:

"Kiss 98.1" KISC is an Adult Contemporary station in Spokane, Washington. 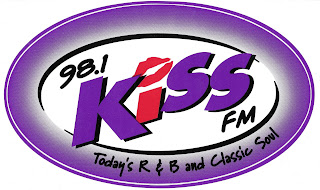 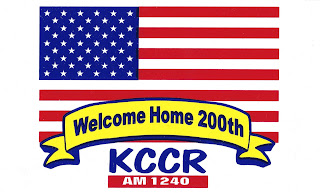 AM 1240 KCCR is a Full Service/Adult Hits station licensed to Pierre, South Dakota.  They went on the air in February, 1959.  The 200th refers to the South Dakota Army National Guard's 200th Engineer Company. 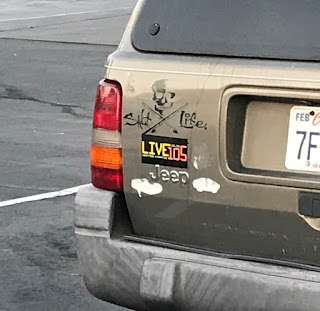 I saw this bumper sticker while in California.  While I don't have this particular decal from San Francisco's "Live 105" KITS, I do have thirteen others from this long-time Alternative Rock station.

Before they became a Modern Rock station, KITS carried a tight-playlisted, "Hot Hits" CHR format from 1983 until around 1985.

The Alex on the sticker refers to DJ Alex Bennett who did mornings at "Live 105". 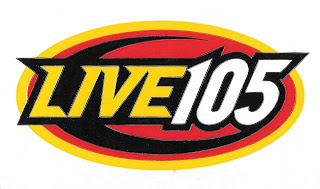 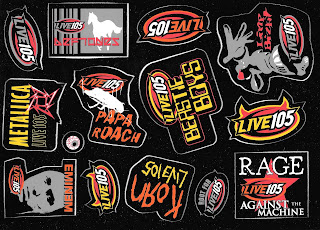 This sticker is circa 2001 when it appears KITS had an Active Rock format including Metal and Hip Hop. 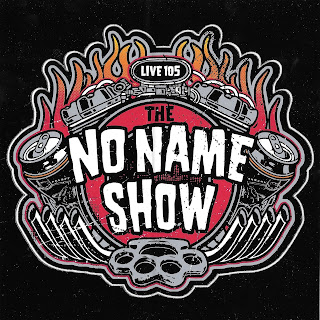 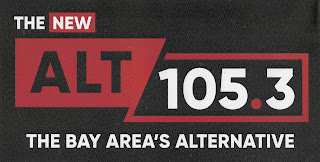 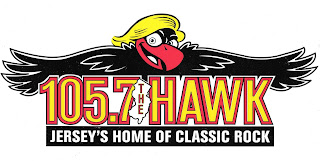 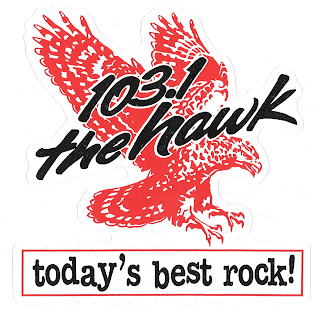 AM 1140 WAWK is licensed to Kendallville, Indiana and carries a Classic Hits format.  They are also heard on translator W238BH at 95.5 FM. 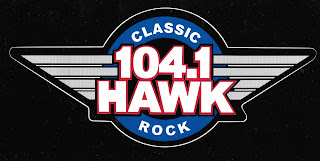 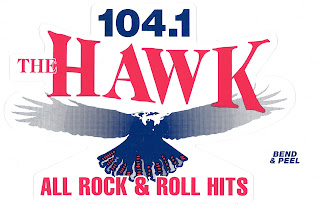 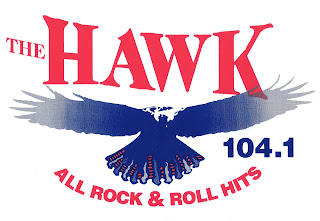 I recently got back from a fun, two-week vacation in Cabo San Lucas, Mexico and southern California. The first week in Cabo, we rented one floor of a house overlooking the Pacific Ocean. 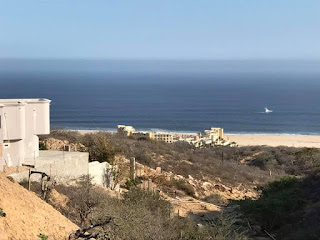 Our rental came with a car, so each day we planned one main activity and attempted to find our way through the dusty, speed bump-filled streets of this city on the tip of the Baja Peninsula. 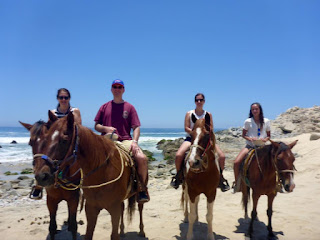 We went horseback riding on the beach.  Our tour leader looked just like Pancho Villa. 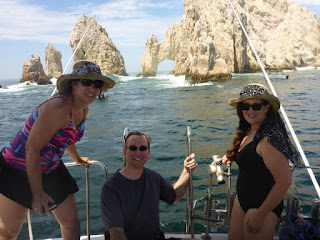 One day we chartered a boat to take us snorkeling as well as around the beautiful rock formations including Land's End aka the Arch of Cabo San Lucas. 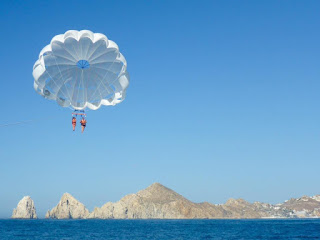 Later in the week we went parasailing around these same beautiful landmarks.

Week two was spent with family in Wildomar, California which is about an hour from both Los Angeles and San Diego.  Temperature records were being broken all over southern California when we arrived.  It was 110 degrees in Wildomar the day we got there.
We hit Legoland, the San Diego Zoo, Del Mar Beach at Camp Pendleton (twice) and Laguna Beach.  And, as is mandatory, (especially with the grandkids in tow) Disneyland. 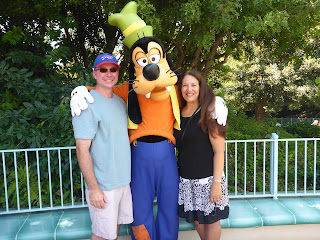 My wife posing with a clumsy, dimwitted dog.  And Goofy. 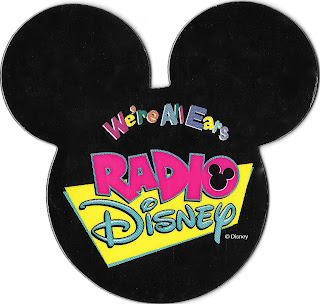 Radio Disney was launched in November, 1996 in four markets--Minneapolis, Atlanta, Salt Lake City and Birmingham, Alabama.  The network for preteen listeners existed primarily on AM stations even though it had a music intensive format.  At one time Radio Disney could be heard on dozens of stations nationwide but, after a major selloff in 2014, currently exists mostly on FM station's HD sub-channels. 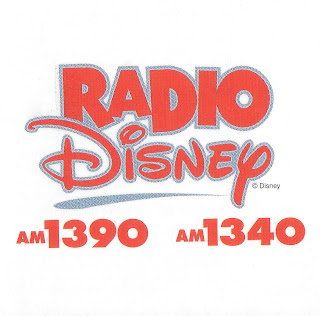 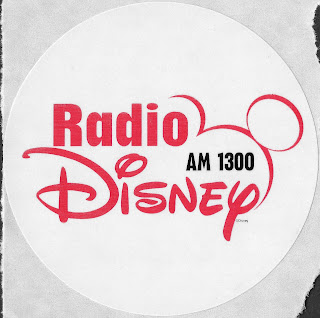 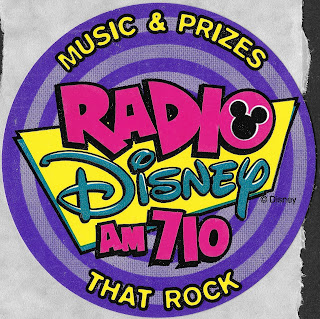 AM 710 KDIS - The onetime flagship station based in Los Angeles, California. 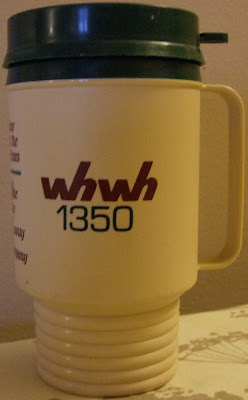 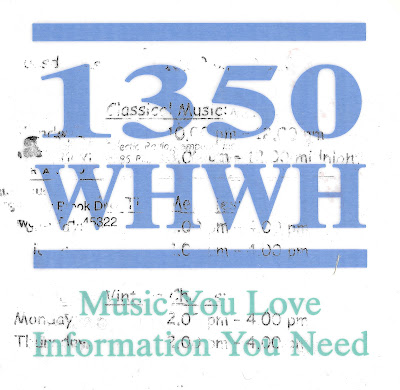 Princeton, New Jersey's WHWH signed on the air in September, 1963.  The call letters stand for the station's founder and principal owner (W) Herbert W Hobler.
Unfortunately, the ink from the back of another decal stuck to the front of the above window cling sticker from 1996.  WHWH currently carries programming in Spanish. 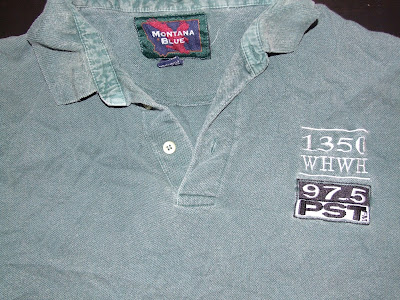 This is a staff shirt from when WHWH was co-owned with WPST.
Posted by Greg at 4:53 PM No comments: 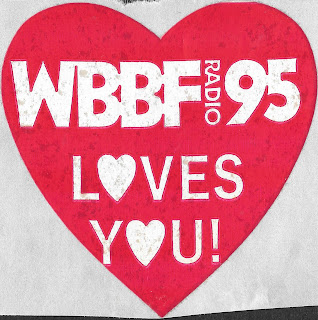 950 AM in Rochester, New York became WBBF (W Buy B Forman) when they were bought by the B. Forman department store chain in 1953.  They were a successful Top-40 station from that time up through the late 1970s before flipping to Talk in the 1980s. 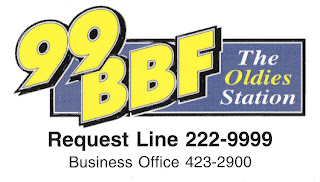 WBBF-FM went on the air as a listener-supported Classical station in 1961.  The above magnet is circa the late 1990s when they were an Oldies station at 98.9 FM.