Identifying this sticker has been a fruitless challenge. There are clues but so far Google hasn't been able to work her magic on this one. The backing of the sticker is brown and the full AM frequency isn't given so I'll take a wild guess and say it's from the mid 1970s. Here's what we know so far....
--The current KKEA is in Honolulu, Hawaii at 1420 AM.
--There is a WKEA at 98.3 in Scottsboro, Alabama owned by KEA Radio. There happens to be a station at 1330 AM also licensed to Scottsboro--WZCT--but I can't find a previous ownership connection between the two. The only former call letters I could find for WZCT were WSGG.
--Maybe it's a television station...Channel 13...doubtful.
Help!
UPDATE:  A reader confirmed that there was a WKEA in Scottsboro, Alabama circa 1981.  Thank You person-who-I-didn't-ask-permission-to-use-her-name-but-it-rhymes-with-Maureen!
Posted by Greg at 6:56 PM No comments:

1230 AM WBVP went on the air in Pittsburgh, Pennsylvania in May, 1948.  They air a News/Talk format and are one of 51 stations in the Pittsburgh Steelers Radio Network.  WBVP is licensed to (W) BeaVer Falls, PA.
Posted by Greg at 11:37 AM 2 comments:

KCEL broadcast a variety of musical genres including Rock, Country, Jazz, Oldies and other specialty shows before being sold and flipped to a Regional Mexican format in 2004.
Posted by Greg at 9:24 AM No comments:

The typeface and overall groovy design of this sticker, along with the brown backing, suggests that this is from the 1970s. Someone wrote the call letters on the back but to me it looks like "YBTM-FM." A KBTM currently exists but it's an AM station in Arkansas. WBTM is a station at 1330 AM in Virginia. Not much to Google on here. Any ideas?
UPDATE: It is indeed KBTM - Jonesboro, Arkansas circa 1979-1982. Thanks for your help everybody! I'm pretty stoopid.
Posted by Greg at 11:01 AM 5 comments:

WUFM is the home of the Radio U network of Alternative Christian stations based in Columbus, Ohio. Radio U has four translators in Ohio as well as two outlets in California. You have to listen pretty closely to the lyrics to even realize they're playing Christian rock....the song I'm listening to right now is a dead-on impersonation of the Killers. Specialty shows also delve into rap, electronica and hardcore/metal.
Posted by Greg at 6:54 AM No comments:

Minneapolis, Minnesota's WWTC (WW Twin Cities) was the flagship station of the Radio Aahs Network which lasted from 1990 to 1998. Radio Aahs programming was aimed at children under 12 and at it's peak had 29 stations running the format. Disney began working with WWTC as a marketing partner and then went off and launched their own childrens station in Minneapolis (KDIZ) as a direct competitor. This led to a multi-million dollar lawsuit which Radio Aahs won against Disney in 2002.

WINE AM is licensed to Brookfield, Connecticut. WINE FM is now Rock station "i95" WRKI.

KORK was licensed to Las Vegas, Nevada and is now KBAD an ESPN Radio affiliate.
Posted by Greg at 9:40 AM No comments:

KHOM began in 1989 as an Oldies station until 1994 when it flipped to Top 40 as Mix 104.1. A slew of format and call letter changes occurred over the next decade including Classic Rock as KFXN "The Fox", adult-leaning Top 40 KSTE "KISS FM", Gospel KHEV "Hallelujah 104.1." and, for the next few minutes, KYRK "The Rock of New Orleans." KHOM was licensed to Houma, Louisiana.
Posted by Greg at 7:44 AM No comments:

A nice piece of psychedelia from KAFY in Bakersfield, California. They were a top rated Rock station in the 1960s that would later be bought by musician Buck Owens, flipped to Country, and moved up the dial to 800 AM.
Posted by Greg at 5:33 AM No comments: 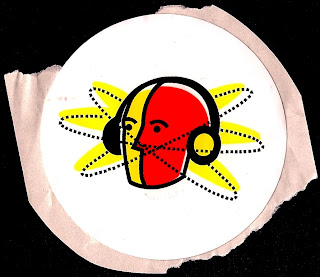 WRUW is the student-run radio station from Case Western Reserve University in Cleveland, Ohio.
Posted by Greg at 1:42 PM No comments:

KGSG was a Southern Gospel station licensed to Pasco, Washington.
Posted by Greg at 6:24 AM No comments:

Toronto's CHFI 1540 AM was a Beautiful Music station beginning in the early 1960s. By 1971 they had moved down the dial to 680 AM and changed their call letters to CFTR--a tribute to Ted Rogers, Sr., a Canadian radio pioneer. CFTR was a legendary Top 40 station throughout most of the 70s and 80s before switching to all News in 1993.
Posted by Greg at 8:44 PM No comments:

KQNG is a combo CHR on FM and News/Talk on AM. Both are licensed to Lihue on the island of Kauai in Hawaii which is also where the 1976 version of King Kong was filmed. Any idea what the phrase at the top of the sticker translates to?
Posted by Greg at 12:55 PM No comments:

WKZO is a News/Talk station from Kalamazoo, Michigan. It is one of 35 stations in the Detroit Tigers Radio Network. This particular Tigers logo was in use from 1961 to 1993 and gets weirder the more you look at it.....something about those crazy eyes. Click on the sticker for a closer look. WKZO-TV changed calls to WWMT in 1985.
Posted by Greg at 6:30 AM 1 comment:

Radio Corax is a non-commercial, volunteer-run station broadcasting in 11 different languages from Halle, Germany. Ich unterstutze translates to "I support." The mascot is a corax which is the Latin species name of the common raven as well as the name of a mythical human/bird hybrid or wereraven.
Posted by Greg at 5:27 AM No comments:

WQBE was located at 950 AM in Charleston, West Virginia. In 2001 the News/Talk station switched call letters to WVTS although there is still a co-owned WQBE FM running a Country format. The Charleston Rockets were a semi-pro team that played in the Continental Football League starting in the mid 1960s.
Posted by Greg at 5:34 AM 1 comment: 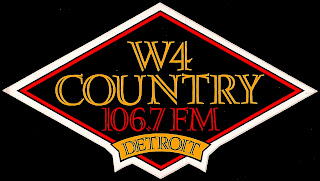 The country format represented by these WWWW stickers lasted from 1980 until 1999. 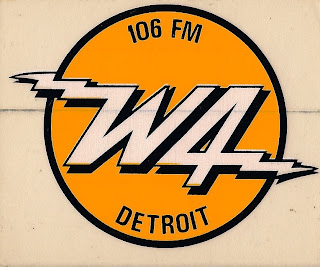 Prior to 1980 "W4" was an album rock station most remembered for employing Howard Stern. He hated country music but stayed on briefly after the format change and was known on the air as Hopalong Howie. Stern then bolted back to the rock format at WWDC "DC-101" in Washington, DC. WWWW was licensed to Detroit, Michigan. 106.7 FM is now WDTW "106.7 The Beat."
Posted by Greg at 5:42 AM No comments:

WLOK is a Black Gospel station licensed to Memphis, Tennessee. In 1977 it became the first African-American owned radio station in Memphis. WLOK is a short walk away from the Lorraine Motel where Martin Luther King Jr. was assassinated in 1968.
Posted by Greg at 5:00 AM No comments:

K-LORD is a Christian music station which began broadcasting in 1986. In the mid-90s they became the first of many insidious “Air 1” radio stations of which there are now over one billion 100 spread across the country mostly via broadcast translators. KLRD is licensed to Yucaipa, California.
Posted by Greg at 5:49 AM 3 comments: 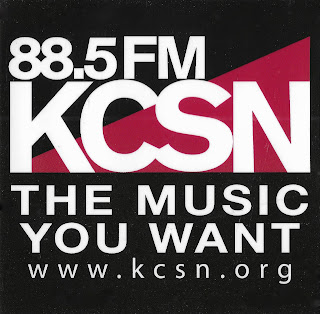 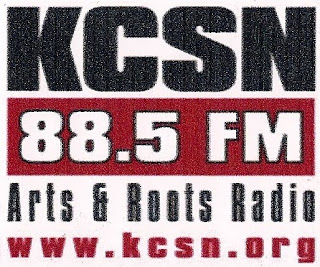 KDLD/KDLE flipped from Modern Rock to Spanish "El Gato 103.1" yesterday. They'll continue the format as an online station. Here's part of the statement from their website:
"Indie 103.1 will cease broadcasting over this frequency effective immediately. Because of changes in the radio industry and the way radio audiences are measured, stations in this market are being forced to play too much Britney, Puffy and alternative music that is neither new nor cutting edge. Due to these challenges, Indie 103.1 was recently faced with only one option --- to play the corporate radio game."
Indie 103.1 was like a better-run college station with a bigger budget and name DJs including Henry Rollins from Black Flag, Dave Navarro of the Red Hot Chili Peppers and Steve Jones from the Sex Pistols. The station logo was designed by Shepard Fairey, the guy who also did the iconic Obama CHANGE poster. KDLD is licensed to Santa Monica, California and KDLE is licensed to Huntington Beach.
Posted by Greg at 5:59 AM 4 comments:

Cool FM broadcasts from the former island of Walcheren in the Netherlands. It has since been connected to the mainland by a series of dikes. Visit them here.
Posted by Greg at 7:01 AM 2 comments:

KARY is licensed to Grandview, Washington.
Posted by Greg at 5:16 AM No comments:

The Eagles take on the Cardinals this Sunday in Glendale, Arizona for the NFC Championship. WYSP ("Your Station in Philadelphia") is the flagship station of the Eagles Radio Network. KTAR ("Keep Taking the Arizona Republic") is the radio flagship of the Cardinals as well as the Phoenix Suns and Arizona Diamondbacks.
Posted by Greg at 9:12 PM No comments: 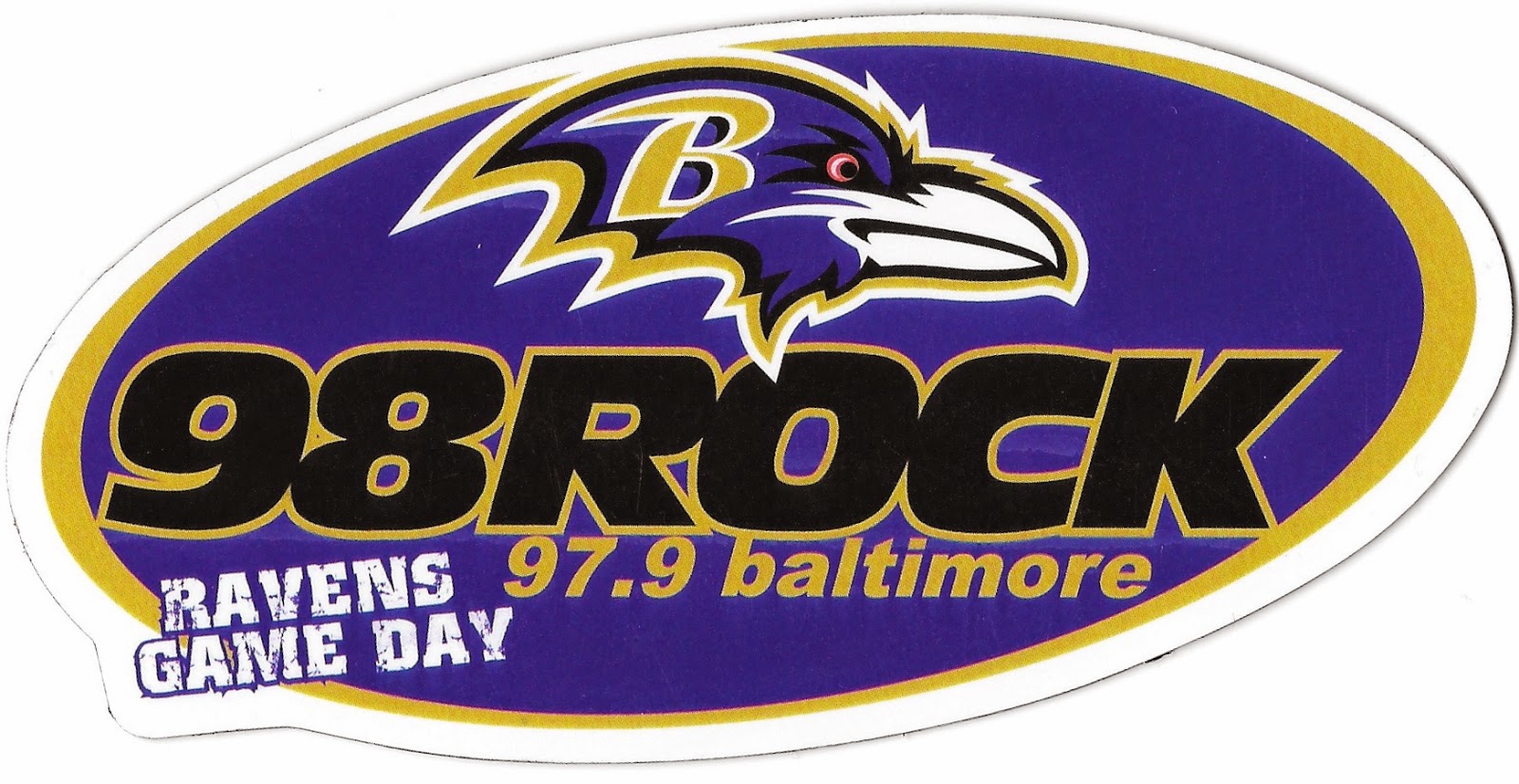 One of the first stickers I ever got was a black & white WRIF decal. I went to the library and found a book that listed radio station formats and mailing addresses. Unfortunately it was 1986 and the book was from 1976 so many of the self-addressed stamped envelopes I mailed out came back Return to Sender because the stations moved or no longer existed for whatever reason. WRIF sent about a dozen of their classic racetrack-shaped stickers which I promptly used to decorate the inside of my high school locker and book covers. After one of the covers got worn out I chucked it in the trash. I guess somebody else liked it because a few days later I saw it covering someone else’s book. I wanted to ask the kid if he enjoyed picking through trash cans for his book covers but never did.
The album rock station’s overall logo hasn’t changed in more than 25 years although somewhere along the way they went crazy and switched from “WRIF 101” to “101 WRIF.” The Riff is licensed to Detroit, Michigan.
Posted by Greg at 11:07 AM 1 comment:

Attack of the Killer B93.7s 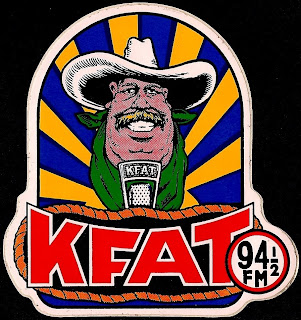 This lard-ass is about to break the dreaded 200 pound barrier. Too much pie and not enough veggies during the holidays. Eat less, move more, blah blah blah.......
KFAT was a freeform, Country/Americana station that lasted from 1975 to 1983 and was licensed to Gilroy, California. CHUB broadcast from Nanaimo, British Columbia starting in 1949. Supposedly, the city's nickname is The Hub City hence the call letters. The station moved from 1570 AM to 102.3 FM in 1994 and a year later changed calls to the much less amusing CKWV.
Posted by Greg at 5:52 AM 1 comment: