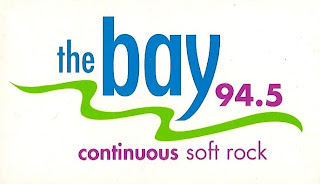 Formerly known as KFAT, "94.5 The Bay" KBAY is an Adult Contemporary station licensed to Gilroy, California.  They were the top-rated station in the San Jose market according to the latest Arbitrons.
Posted by Greg at 4:26 PM 1 comment:

WSSA (W South Side Atlanta) was a Country station licensed to Morrow, Georgia.  1570 AM is currently WIGO and plays Gospel music.
Bobby C. Hanson aka Ludlow Porch was a humorist and radio host for over 35 years as well as an author of multiple books.  Ludlow's entrance into radio came via a 1972 article in Sports Illustrated which profiled him as a master of trivia.  This led to an appearance on Atlanta's WSB which was heard by the management of WRNG radio who invited him to visit.  He ended up working there for 10 years.  At one point his show was simulcast on a few dozen stations across the south. Ludlow Porch was inducted into the Georgia Radio Hall of Fame in 2007 and passed away in 2011.
Posted by Greg at 2:39 PM No comments: 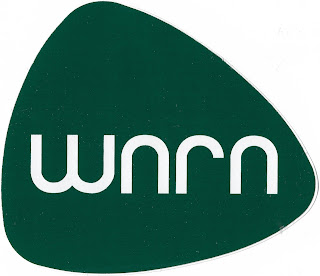 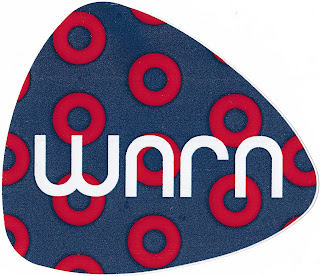 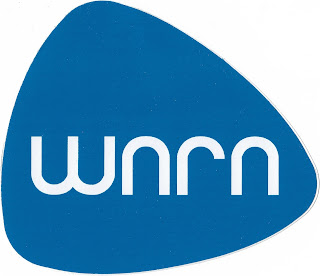 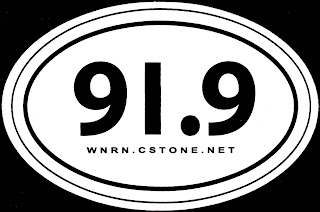 WNRN (W New Rock Now) is a non-commercial Modern Rock station broadcasting at 91.9 FM in Charlottesville, Virginia.  They are also heard on seven other frequencies in the north/central part of the state.  Specialty shows include Goth, Jam Bands, Bluegrass, Rap, Ska and Acoustic music in the morning.  WNRN went on the air in 1996.

"Key 93" WKRY was an Easy Listening station in Key West, Florida from 1985 to 1999.  93.5 FM is currently an Oldies station with the call letters WKEY.  Fausto's Food Palace is a local grocery store which has operated in Key West since 1926. 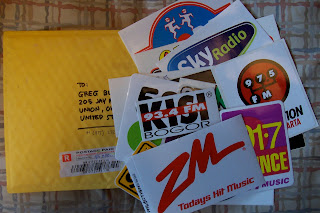 Yesterday I received a packet of stickers from Ricky in Jakarta, Indonesia.  Decals from Germany, Canada, Netherlands, New Zealand and the United States were included as well as my first ever radio stickers from Indonesia.  Thanks Ricky!  Your decals are in the mail. 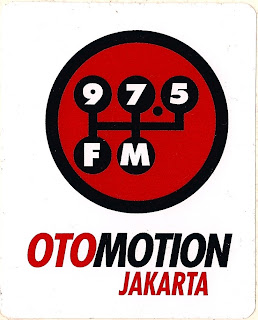 A stickshift knob sticker from "Motion 97.5", a Hot AC/Contemporary Hit station broadcasting in Indonesia's capital city of Jakarta.  They play a 50/50 mix of Indonesian and foreign artists. 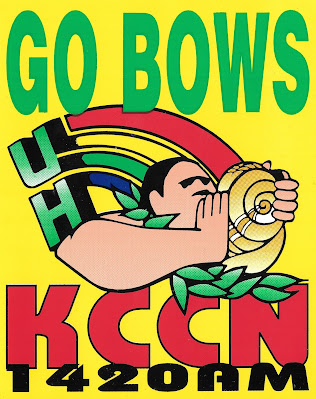 Honolulu's KCCN carried a Hawaiian music format from 1966 to 2003.  The giant, tiki-themed sticker at the top measures a whopping 15 inches long and probably dates to the mid-1970s.  "No-Ka-Oi" translates to "The Best."  1420 AM is currently KKEA, an ESPN radio affiliate, while the Hawaiian format lives on at KCCN-FM. 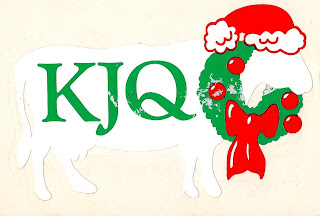 KJQN went on the air in 1983 with a Modern Rock format licensed to Ogden, Utah.  At that time they were located at 95.5 FM and at least partially simulcast on KJQN 1490 AM.  In 1990 the station mascot became Bessie the Cow aka the "Milk Beast" (a little tough to see in the above sticker but she shows up better below.)  The station vehicle was a black and white painted moving truck which gave out tens of thousands of Cream o' Weber dairy products at live remotes. 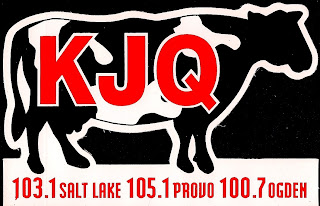 KJQN eventually moved to 103.1 FM licensed to Coalville, Utah and simulcast on 105.1 and 100.7 FM.  In 2005 Bessie permanently went out to pasture when they flipped to Adult Hits as "Jack FM." This past June they switched again to "World Class Talk" KLO.

97.1 KTCR operated on one of the oldest FM frequencies in Minneapolis, Minnesota which was established in 1947.  At one point they played Country music during the day and had a Talk format at night (which would help explain the provocative "Go To Bed With A Friend" slogan.)  What is it with Minnesota radio stations and their double entendres?!  Apparently on the weekends they also had a show called "Smut Talk" hosted by someone named Marv Gatch.  Some KTCR audio and photos can be found at this excellent Twin Cities Radio Airchecks site.
97.1 FM is currently "Cities 97" KTCZ, an early pioneer of the Adult Album Alternative format. 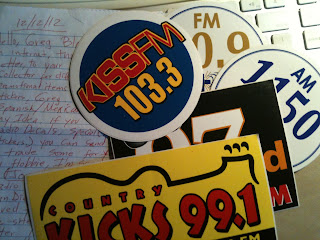 I opened my mailbox the other day to find a nice letter and some stickers from a reader of this blog in Odessa, Texas.  Thanks Jovan!  Some stickers for you are in the mail. 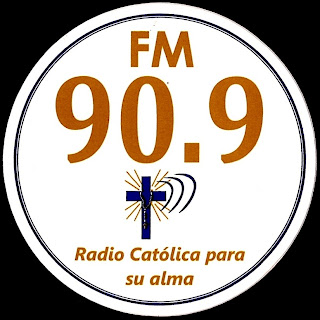 FM 90.9 KVDG (K Virgen De Guadalupe) is a Spanish-language Catholic station in Midland, Texas.  They are part of the non-profit Guadalupe Radio Network which consists of over a dozen stations in Texas, Alabama and Washington, DC.
Posted by Greg at 6:15 AM No comments: 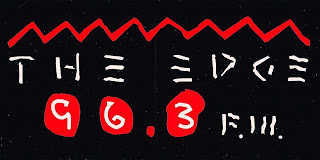 WEJE "96.3 The Edge" was a Modern Rock station in Fort Wayne, Indiana and licensed to Churubusco, IN.  They existed from the mid-1990s to the early 2000s before switching to Country as WWWD.  96.3 FM is currently "Wild 96.3" WNHT with an Urban/Hip-Hop format.

"Lady 1320 AM" was a short-lived station licensed to Hollywood, Florida circa 1980.  These message board posts mention the station but I can't find any solid info as to what their format was.  Were they a Top-40 station?  A female-oriented Country station?  Who knows!?  If you do, feel free to leave a comment.
1320 AM currently carries a World Music format as WLQY. 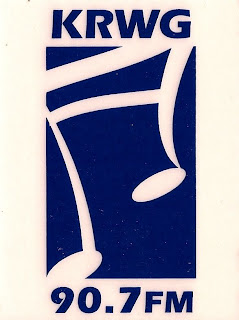 90.7 FM KRWG is a public radio station from New Mexico State University in Las Cruces.  The call letters are named after (K) Ralph Willis Goddard, a founder of the engineering school at NMSU and a pioneering broadcaster in New Mexico.  He was electrocuted to death in 1929 while making adjustments in the transmitter generating room of radio station KOB, the first radio station in the state. 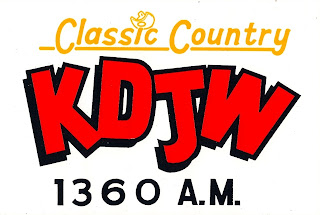 1360 AM KDJW was a Classic Country station in Amarillo, Texas.  They were sold in 2005 and now broadcasts a Catholic religious format.

CFBU is a 250-watt, student-run station from Brock University in St. Catharines, Ontario.

Broadcasting throughout Portugal and based is Lisbon, Antena 1 is a mix of News, Sports and Music.

Antena 3 plays Alternative music, much of it by Portuguese bands.  Both stations are state-owned and operated by RTP (Radio and Television of Portugal.)
Posted by Greg at 2:33 PM No comments: 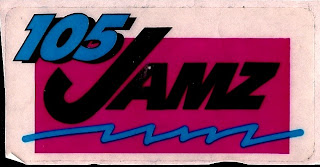 "Boomer 95.3" WRLD is an Oldies station licensed to Valley, Alabama and broadcasting throughout the Columbus, Georgia area. 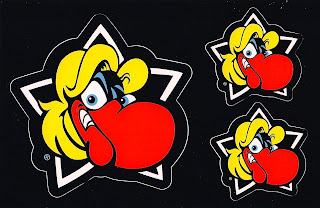 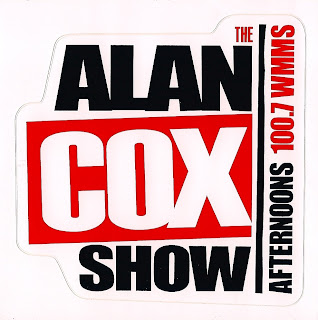 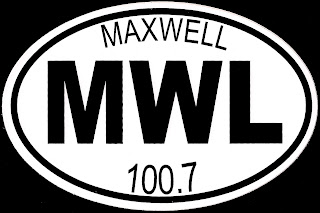 WMMS has been a Rock station in Cleveland, Ohio since 1968.  The top sticker is very similar to another one that I posted in 2009 but there are some very slight "angrier" differences.

"Jeff 92" is a 250-watt Oldies station broadcasting from Jefferson High School in Lafayette, Indiana.  WJEF went on the air as WJJE in February, 1972 with a Middle-of-the-Road format.

By now you've probably heard about the Australian DJ prank gone wrong.  2DAY FM DJs Michael Christian and Mel Greig posed as Prince Charles and Queen Elizabeth and managed to get through the receptionist at a London hospital who put them through to the nurse caring for Kate Middleton's severe morning sickness.  The nurse gave an update of Kate's condition.  The receptionist nurse who took the call killed herself last Friday causing the hammer to come down on the jocks.  Lawyers and media critics are now discussing the ethics of prank phone calls while the duo have been suspended and could well be fired. 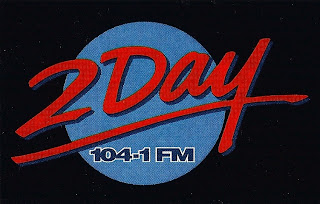 2DAY FM is a Top-40 station in Sydney, New South Wales, Australia.
Posted by Greg at 2:27 PM No comments:

While Christmas shopping yesterday I spotted a guy in a blue and white t-shirt that said "WEST COAST ROCK RADIO 92.8 FM SAN DIEGO CALIFORNIA."  I think it was an example of what I call "fake nostalgia" clothing that you find at stores like Old Navy who specialize in t-shirts with vintage graphics from rock bands, biker bars, colleges, campgrounds, automotive supplies, audio equipment and a zillion other things.  Sometimes these shirts feature actual name brands but just as often they're retro-looking fakes.  I don't know why these fake ones have always bothered me but none so much as that radio shirt from yesterday.
The 92.8 frequency is not used in San Diego or North America for that matter, where all stations end in 0.1, 0.3, 0.5, 0.7 and 0.9 MHZ. 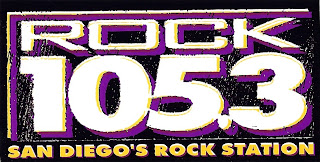 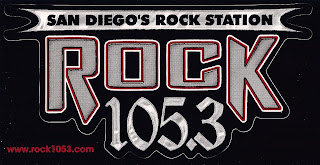 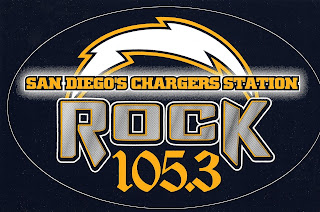 AM 970 in Portland, Maine used the call letters WCSH (W Congress Square Hotel) from 1925 to 1981.  For at least some of those years they carried a Top-40 format as evidenced by this music survey from 1963.  970 AM is currently a Talk station WZAN.

Based near Sacramento, California, the massive K-LOVE empire is a network of Contemporary Christian stations heard on hundreds of stations and translators across the country.

In the early 1980s KQDQ was a Music-of-Your-Life Adult Standards affiliate in Eugene, Oregon.  Wikipedia says 1320 AM is now "Inforadio" KSCR, a Business News station but it's hard to know from their currently information-less website.
Posted by Greg at 4:30 PM No comments:

1490 AM KBUR is a News/Talk station licensed to (K) BURlington, Iowa.  The sticker depicts the Great River Bridge which crosses the Mississippi River and connects Burlington to Gulf Port, Illinois.

"K104.7" is possibly from WSPK in Poughkeepsie, New York but I really have no idea.  Do you?