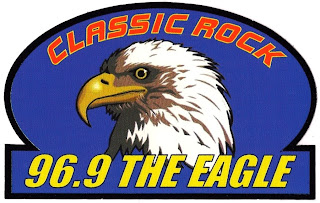 "96.9 The Eagle" KKGL is a Classic Rock station from Boise, Idaho. 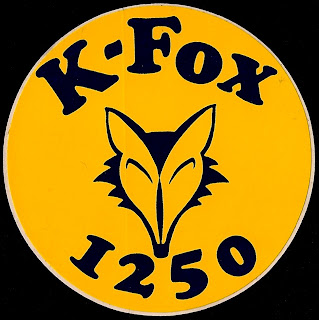 "K-Fox" KKFX was an R&B/Urban station in Seattle, Washington. They were on the air from the early 1980s until 1993 when they became the Radio Disney affiliate KKDZ.
Posted by Greg at 9:25 AM 1 comment: 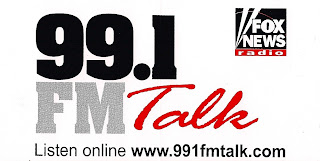 KKFT is a conservative-leaning Talk station from Reno, Nevada. Syndicated hosts include Laura Ingraham, Dennis Miller, Dr. Laura and Glenn Beck. "99.1 FM Talk" is licensed to Gardnerville-Minden, NV.
Posted by Greg at 8:02 AM No comments: 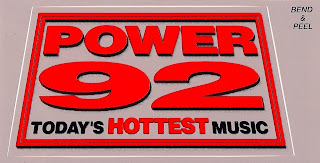 KKFR has carried some form of Contemporary Hit music in Phoenix, Arizona since 1985. Different elements have come and gone including R&B/Hip-Hop, Rhythmic Pop, straight-up Top-40 and even a hint of Modern Rock. In 2006 KKFR moved up the dial to become "Power 98.3" while 92.3 became KTAR with a Talk format. "Power 92" was licensed to Glendale, AZ.
Posted by Greg at 10:08 AM 4 comments: 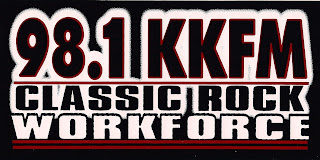 KKFM is a Classic Rock station from Colorado Springs, Colorado. 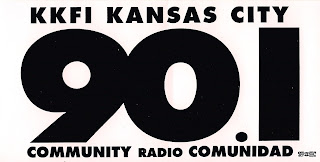 KKFI is an independent, non-commercial community radio station in Kansas City, Missouri. Block programming includes Jazz, Rock, Blues, Latin, Reggae and News/Talk. KKFI has been on the air since 1988.
Posted by Greg at 8:10 AM No comments:

KKFG is a Classic Hits station licensed to Bloomfield, New Mexico. The above sticker from 2006 is from when KKFG was a more traditional Oldies station. Looking at their current website it appears they kept ye olde sunglasses logo.

Prior to spinning Oldies KKFG was a Country station known as "K-FROG." At least I'm guessing it was Country since the toad is sporting a cowboy hat and every "Frog" station I know of carries that format.
Posted by Greg at 9:05 AM No comments:

KKEZ is a Hot AC station from Fort Dodge, Iowa. They began with a Beautiful Music format but have been some form of Adult Contemporary or Top-40 since 1979. This sticker is from 1991 and depicts Fort Dodge's skyline including the distinctive clock tower of the Webster County Courthouse.
Posted by Greg at 8:33 AM 1 comment:

KKEX "Kix 96" is a Country station licensed to Preston, Idaho.
Posted by Greg at 8:06 AM No comments: 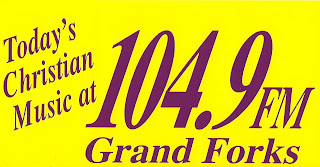 K285BG is one of six local translators for 107.1 KKEQ, a Contemporary Christian station licensed to Fosston, Minnesota. 104.9 FM is licensed to Grand Forks, North Dakota.
Posted by Greg at 9:55 PM No comments: 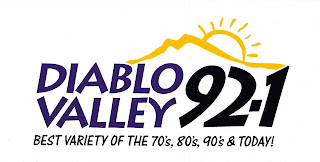 KKDV is an Adult Contemporary station licensed to Walnut Creek, California. This is an earlier sticker with a different slogan and slightly different logo. Their current sticker can be seen here.

"Kiss 107 FM" KKDM is a CHR station licensed to Des Moines, Iowa. They are one of dozens of Clear Channel-owned "Kiss FM" stations across the country.
Posted by Greg at 9:34 PM No comments:

KKDA is a heritage Urban station from Dallas, Texas. They began as a Disco station in 1976 before shifting to a mainstream Urban Contemporary format after disco died a glorious death. KKDA is one of the last independently owned, major market FM stations in existence.

It's tough to see the white-on-clear details of this sticker. Click it to enlarge.
Posted by Greg at 9:52 PM 1 comment: 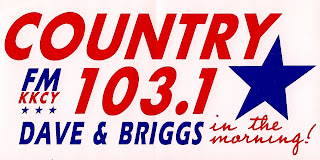 KKCY is a Country station licensed to Colusa, California.
Posted by Greg at 8:59 PM No comments:

KKCS was a Country music station in Colorado Springs, Colorado from 1978 until 2005. After a brief fling as a Regional Mexican format, 101.9 FM is currently KKHI ("K-High") a Smooth Jazz outlet.
Posted by Greg at 9:03 PM No comments:

For reasons too complicated to bore you with, I temporarily no longer have easy access to my sticker collection. Knowing this, I grabbed a random handful of stickers (alphabetized by call letter, naturally) which will make up the content of this blog for the next few weeks. We'll begin with Hawaii's KKCR.

KKCR (Kauaʻi Community Radio) broadcasts a variety of block programming including Hawaiian, Blues, Jazz, Reggae and Classical. The idea for KKCR began after a hurricane slammed into the Hawaiian island of Kauaʻi in 1992. A group of islanders decided to start a radio station for local residents that could withstand severe weather conditions and provide emergency information. KKCR is licensed to Hanalei, Hawaii. 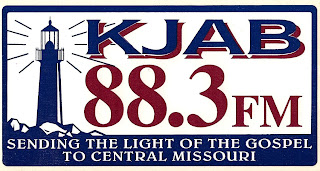 KJAB is a Southern Gospel station licensed to Mexico, Missouri.
Posted by Greg at 7:01 AM No comments:

Today's random dart landed in the Sangre de Cristo mountains of north-central New Mexico, near the town of Taos. 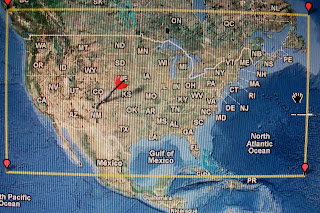 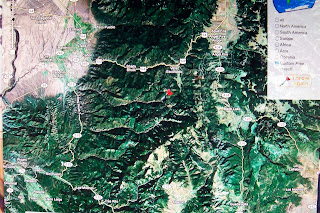 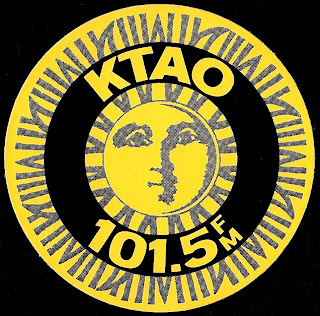 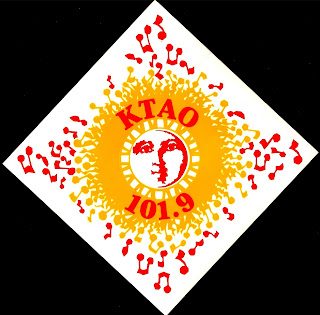 Heavy Metal Parking Lot is a brief time-capsule of mid-1980s wasted youth. The made-for-public-access-TV documentary captures various heshers tailgating before a Judas Priest concert at the Capital Centre in Landover, Maryland. It's a simple concept but hugely entertaining to watch. Tons of Chevy Camaros, shirtless dudes and drunken rambling. Ah...it was a better, simpler time. Check out this clip of a DC/101 fan doing his best Rob Halford impression featuring hair that was long out of fashion even in 1986.

You can view the entire 16 minute movie here. 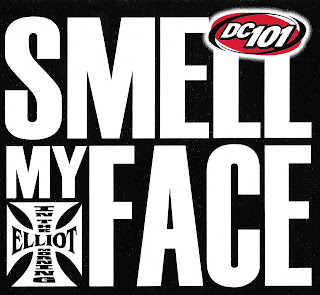 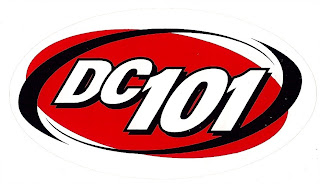 WWDC "DC101" is an Active Rock station from Washington D.C. These stickers have their current logo which they've been using since at least 2004. They were a straight-ahead Album Rock station when Heavy Metal Parking Lot came out in 1986.
Posted by Greg at 9:35 PM No comments:

103.7 FM WCIR is a CHR station licensed to Beckley, West Virginia. Until 1976 they were a Contemporary Christian station whose call letters stood for Christianity In Radio.

1410 AM KQV (King of the Quaker Valley) has been a News station in Pittsburgh, Pennsylvania for almost 35 years. Their history dates back to 8ZAE, an amateur station which signed on in 1919. KQV became officially licensed three years later. The AM 1410 signal was a hugely successful Top 40 station from the late 1950s, through the entire 1960s and lasting until 1975 when they switched to News. One of KQV's DJs in the 1970s was "Jeff Christie," better known today as Rush Limbaugh.
Posted by Greg at 9:13 PM No comments:

WLKC was a Country station licensed to Henderson, New York. 100.7 FM is currently a Classic Hits station WEFX known as "The Fox."
Posted by Greg at 9:17 PM No comments:

KVMX was an Eighties station from Portland, Oregon. "Mix 107.5" was licensed to Banks, OR. The frequency is currently home to Rhythmic Top-40 KXJM "Wild 107.5"
Posted by Greg at 9:10 PM No comments:

AM 1080 KSCO (K Santa Cruz's Own) is a Talk station from Santa Cruz, California.

Radio Val is?/was? a station from Koper, Slovenia on the coast of the Adriatic Sea. My guess is that they are no longer operational since their website is defunct. A pop music station named Val 202 exists which may or may not be related to Radio Val. It is one of three national radio services offered by Radiotelevizija Slovenija, Slovenia's public broadcasting organization.
Posted by Greg at 6:30 AM No comments: 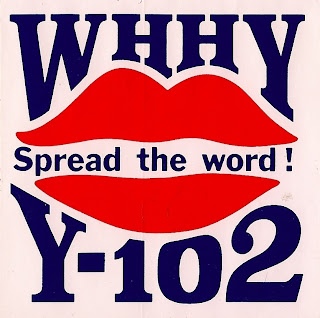 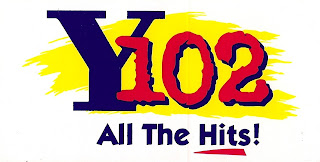 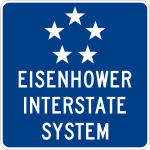 The Interstate Highway system (official name: The Dwight D. Eisenhower National System of Interstate and Defense Highways) consists of over 46,000 miles of roadway serving nearly every major U.S. city. The American Association of State Highway and Transportation Officials (AASHTO) developed a detailed highway numbering system in the 1950s. West-east highways are assigned even numbers and south-north highways are given odd numbers. Numbers generally increase from west to east and south to north. There are also rules about one, two and three digit highway numbers, business routes and shared roadway between two interstates. Interstate signage consists of red, white and blue shields which AASHTO has actually copyrighted but that didn't stop these three radio stations from using the design for their stickers. 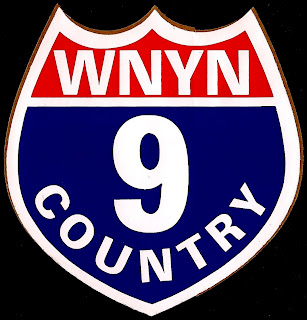 WNYN was a Country music station in Canton, Ohio. They carried that format from the 1960s through the mid 1980s. Currently 900 AM is WCER, a Religious/Syndicated Talk station. 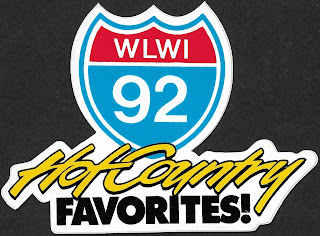 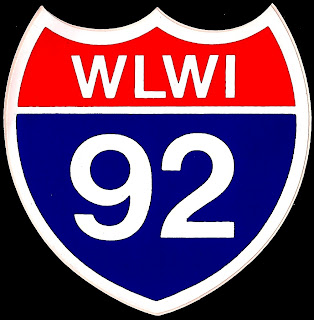 WLWI “I-92” is a Country music station from Montgomery, Alabama. 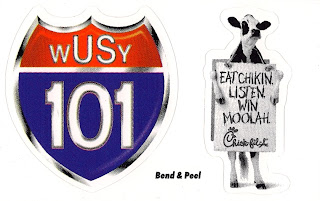 WUSY “Wussy 101” “U.S. 101” is a Country music station from Chattanooga, Tennessee and licensed to Cleveland, TN

WPGI is a Country music station licensed to Horseheads, New York. They dropped the "Piggy" branding and are now known as "100.9 Big Pig." They use the same "Big Pig" mascot as their sister station WPIG in Olean, New York.
Posted by Greg at 7:08 AM No comments: