WRNB went on the air in New Bern, North Carolina in the late 1950s.  This Wikipedia page claims that they were the state's first full-time Top-40/Rock & Roll station.  1490 AM is currently WWNB, a Sports Talk and ESPN Radio outlet.

1300 AM WQPM is an Oldies station licensed to Princeton, Minnesota.  This vintage sticker came out back when they duplicated the programming of WQPM 106.1 FM.

89.9 FM KMOJ is a community-oriented station in Minneapolis, Minnesota aimed mainly toward African-American listeners.  They went on the air in 1976 as WMOJ at 1200 AM before moving to 89.7 FM in 1978.  A power increase and frequency change to 89.9 FM took place in 1984.
KMOJ airs Talk programming along with Soul, Blues, Reggae, Jazz, Hip-Hop and Gospel music.  The call letters are derived from the Swahili word umoja which means unity. 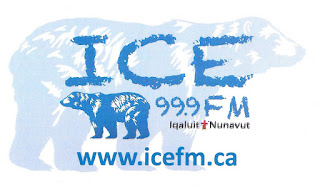 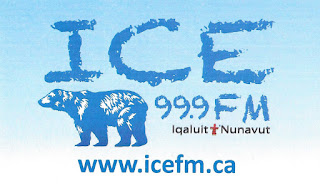 CKIQ "Ice FM" broadcasts from Iqaluit, the capital of the northern Canadian territory of Nunavut.  When they signed on the air in 2002, they were the only commercial radio station licensed to broadcast in the territory--which covers more than 700,000 square miles. 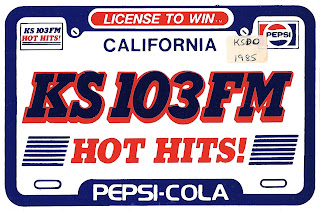 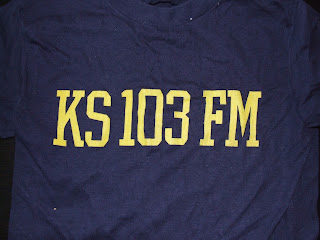 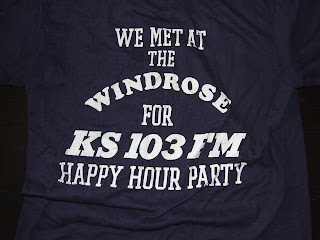 These shirts may or may not be from KSDO.  Anybody know? 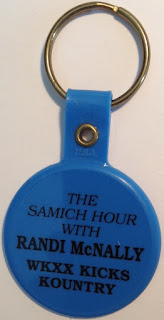 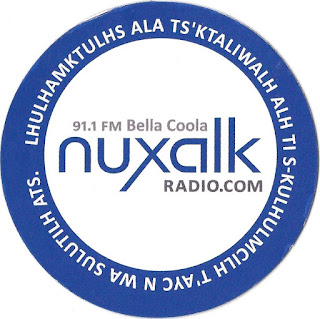 A magnet from 91.1 FM "Nuxalk Radio" in Bella Coola, British Columbia.  CKNN is a volunteer-run, community radio station set up to increase the presence of the Nuxalk language for those First Nations residents who live in the Bella Coola Valley. 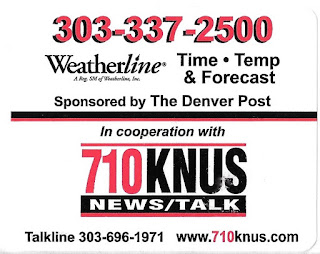 710 KNUS is a News/Talk station in Denver, Colorado. 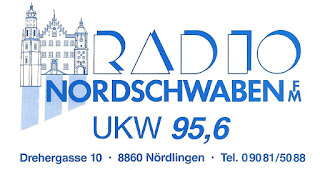 Radio Nordschwaben once broadcast from Nördlingen in southern Germany.  95.6 FM is now part of the RT1 media group.

The medieval city of Nördlingen is built entirely inside a massive depression that was formed when a meteor struck around 14 million years ago.  It wasn't until 1960 that anyone knew that the town was on top of what is now called the Ries Crater.  The stone in the city is at least partially made up of millions of microscopic diamonds which were formed by the impact of the meteor.  Nördlingen is also entirely surrounded by a wall which was started in the 14th century.  The sticker depicts the area's distinctive fachwerk buildings as well as the bell tower of St. George's church.

"Juice 107.3" is a community radio station in Southport, Queensland, Australia.  They play a mix of Contemporary Christian and secular pop music along with news and talk programs.

WOXO is a Country station licensed to Norway, Maine.  Programming is now also simulcast on 100.7 FM WTBM licensed to Mexico, ME. 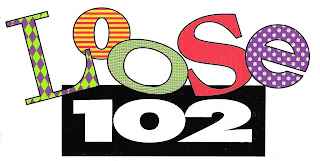 A late-1990s sticker from "Loose 102" WLSS in Baton Rouge, Louisiana.  They originally carried a Modern Adult Contemporary format then quickly flipped to Top-40.  By 1999 they were back to using WFMF, their current call letters and the ones they were using before becoming WLSS. 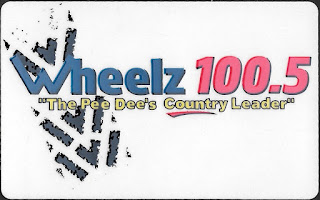 KAYC was a Top-40 station in Beaumont, Texas in the 1960s and 70s.  Not sure if the shamrock had any significance to the station or if it was just a cute station symbol.  Anybody know?

Dartmouth College's WDCR began broadcasting in 1958 and was the oldest college radio station in New Hampshire.  Radio at Dartmouth dates back even further with an AM station as early as 1924 and a carrier-current station in the early 1940s.  WDCR ceased operations in 2008 (although they briefly went back on the air in the summer of 2009 just to keep its FCC license alive) but went away for good in 2010.  Dartmouth radio continues on FM with WFRD and on the internet with webDCR.
Posted by Greg at 8:59 PM No comments: 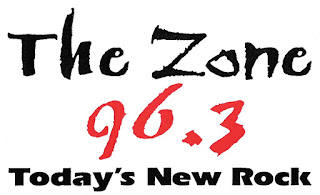 KRZN "96.3 The Zone" is an Active Rock station in Billings, Montana.

98.9 KKZX is a Classic Rock station in Spokane, Washington. 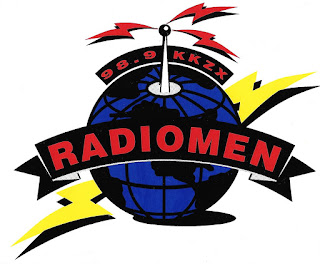 KEDG "Kiss 106.9" was an Urban station in Alexandria, Louisana circa 2004.  They now carry an Adult Contemporary format as "Sunny 106.9".
Their logo resembled other Clear Channel-owned "Kiss" stations, specifically Boston's WXKS which has been using a similar logo since at least the mid-1980s. 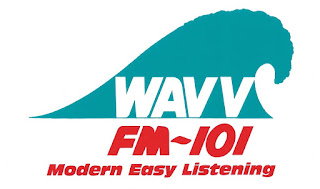 101.1 FM WAVV is the last independently-owned radio station in southwest Florida.  They went on the air in 1987 with an Adult Contemporary format but switched to Easy Listening in 1995.  Their huge playlist and 100,000-watt signal seems to have translated into ratings success.  The commercial below says that WAVV has been the area's most listened to radio station for more than 20 consecutive years.  WAVV licensed to Naples Park, Florida. 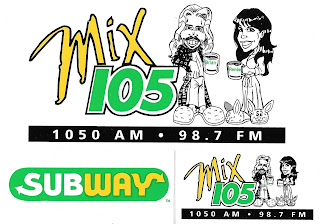 97.9 KUHS is a community radio station in Hot Springs, Arkansas.  The solar-powered, LPFM station went on the air in August, 2015. 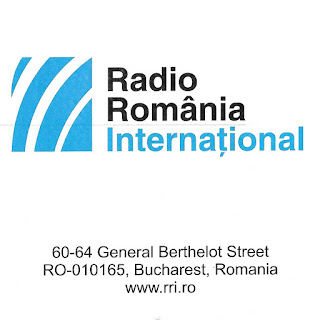 The history of Romanian radio targeting listeners abroad dates back to 1927 when an experimental 200 watt station began operating on the 280 meter band from the University Electrotechnical Institute.  Up until World War II, "Radio Bucharest" broadcast programs of a general nature covering Romanian developments in politics, culture, the economy and sports.  After Romania joined the Axis powers their external radio service became more propagandic and was used to serve the country's military purposes as well as that of their ally Germany.  Radio Bucharest was renamed Radio Romania International after the anti-communist revolution of 1989.  RRI now broadcasts on shortwave and satellite in more than a dozen languages.

A super-mini, one inch sticker from radio station 2GB in Sydney, Australia.  2GB began broadcasting in August, 1926 at 950 on the AM band and was originally operated by an entity known as Theosophical Broadcasting Station Pty Ltd.  Theosophy is a blend of eastern religion, scientific inquiry and a belief in the universal brotherhood of man and was a precursor to the New Age movement.  The call letters refer to Giordano Bruno, an Italian philosopher much revered by Theosophists.
2GB currently broadcasts at 873 AM and carries a News/Talk format. 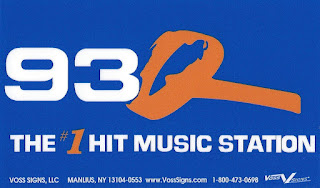 "Touch 96" was an Urban Adult Contemporary station in Virginia Beach, Virginia circa 1991.  They originally carried the call letters WKSV (left over from their days as "Kiss FM") but later changed to WMYA.  96.1 FM is currently Alternative Rock "96X" WROX now licensed to Exmore, VA.
Posted by Greg at 5:22 PM No comments:

WGCT was a Country station (possibly Classic Country according to this message board post) licensed to Ellettsville, Indiana.  It is now known as "Hoosier Country 105.1" WHCC. 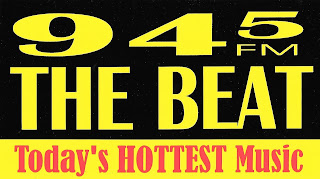 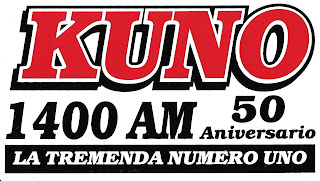 1400 AM KUNO went on the air in May, 1950 from Corpus Christi, Texas.   They have carried Spanish language programming either part or full time for their entire 65 year history.