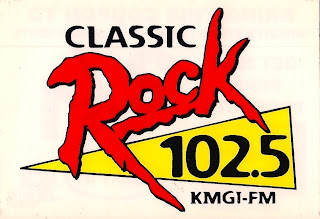 KMGI is a Classic Rock station from Pocatello, Idaho.
Posted by Greg at 6:29 AM No comments:

Saw this sticker on a minivan in front of us as we were pulling into a parking garage before last night's Reds/Astros game in Cincinnati.

WCGW is a Religious Teaching/Southern Gospel station licensed to Nicholasville, Kentucky.
Posted by Greg at 1:16 PM No comments:

The Saturday before Memorial Day is always International Jazz Day. This holiday celebrates the worldwide reach of jazz along with the culture and history of this uniquely American music. 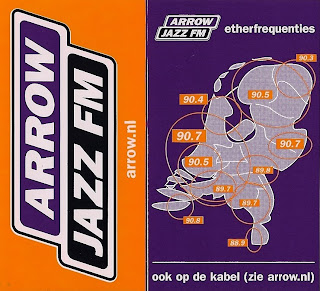 Arrow Jazz FM is a network of stations based in The Hague, Netherlands. Some or all of the frequencies shown on the map may not be functioning as it appears Arrow Jazz failed to pay their licensing fees to the Dutch government. Arrow Jazz is co-owned with Arrow Classic Rock and Arrow Caz! which features Pop, Dance and Urban music.
Posted by Greg at 6:18 AM No comments: 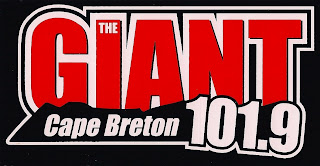 CHRK "101.9 The Giant" is a Hot Adult Contemporary station from Cape Breton Island in Nova Scotia. They're licensed to Sydney, NS and first went on the air in May, 2008.

The station is named after Angus MacAskill, who the 1981 Guinness Book of World Records listed as the tallest natural giant who ever lived, the strongest man who ever lived, and the man having the largest chest measurements of any non-obese man. MacAskill stood 7 feet 9 inches tall, weighed 425 pounds and had 44 inch wide shoulders. He was born in Scotland in 1825 but emigrated as a child with his family to Canada. He later toured the United States, the West Indies and Cuba making a small fortune in wagers over his weight-lifting ability and may have even appeared at P.T. Barnum's museum. Some of his feats include carrying barrels of pork weighing over 300 pounds under each arm, lifting a fully grown horse over a four-foot fence and lifting a 2,500 pound anchor. The giant returned to Nova Scotia in the 1850s and entered the salmon fishing industry as well as operating a general store. There are two Angus MacAskill museums, one on the Isle of Skye in Scotland and the other in Englishtown, Nova Scotia. 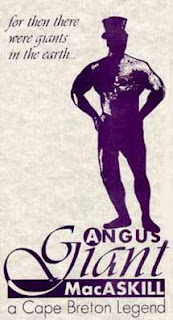 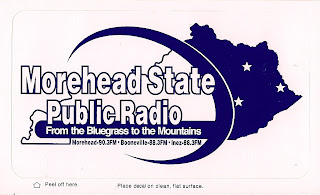 Morehead State Public Radio began in 1965 with WMKY in Morehead, KentuckY. In 2001 they added 88.3 FM WOCS to their network in partnership with Owsley County Schools. They also have a translator licensed to Inez, KY at 88.3 FM. MSPR's combined signals cover much of eastern Kentucky and parts of Ohio and West Virginia. Much of MSPR's programming comes from National Public Radio but they also carry local programming including shows featuring Bluegrass, Blues, Jazz, Americana and Spoken Word. 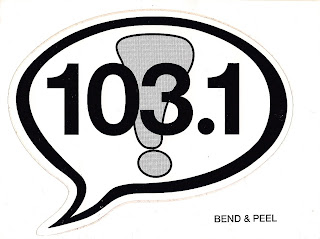 A rare, frequency-only sticker from Adult Album Alternative WRJT "The Point" which is licensed to Royalton, Vermont. 103.1 FM is one of 7 stations in The Point's network which also includes 104.7 WNCS - Montpelier, 95.7 WDOT - Danville and 4 translators enabling it to be heard throughout most of Vermont as well as parts of New York and New Hampshire. WNCS began back in 1977 with an eclectic mix of rock, jazz, folk, country and classical and was an innovator of what is now the Triple-A format.
Posted by Greg at 6:59 AM No comments: 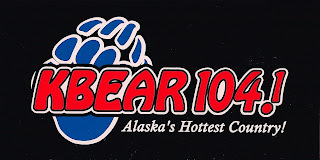 KBRJ "KBEAR 104.1" is a Country station from Anchorage, Alaska. 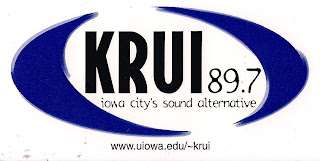 KRUI is a 100-watt, student-run station from the University of Iowa. They've been broadcasting at 89.7 FM since 1984 but their history dates back to 1952 as the carrier current station KWAD and later KICR. KRUI is licensed to Iowa City, Iowa.

KJCR is a Christian station owned by Southwestern Adventist University in Keene, Texas. The KJCR studios were struck by lightning in September 2009 temporarily knocking them off the air. A few pictures of the resulting fire can currently be seen at their website. 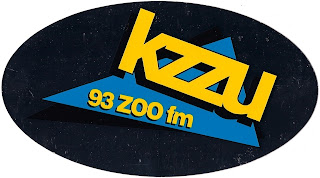 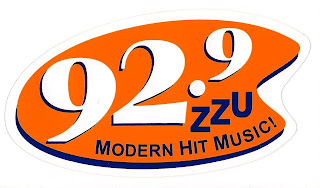 KZZU is a Top-40 station from Spokane, Washington. They dropped the "Zoo FM" branding and now go by "92.9 ZZU" with the slogan "Modern Hit Music." The top sticker has a mirrored/chrome background which my scanner turned into something resembling freshly paved asphalt. 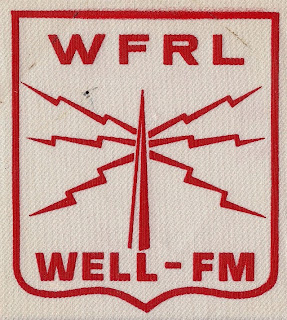 This is an iron-on patch (or is it a textured sticker that lost its adhesive?) from WFRL which once existed at 98.5 FM and 1570 AM. The AM side still exists while the FM is currently a Country outlet "Q98.5" WXXQ. Was WELL-FM a nickname for WFRL FM or did a station exist that had the WELL call letters? One thing is for sure, WFRL AM & FM is/was licensed to Freeport, Illinois. If you have any info on WELL FM/WFRL keep it to yourself feel free to leave a comment.

UPDATE: Received a very informative message from Wyatt Herrmann which I've lazily copied and pasted below. Thanks Wyatt!

WFRL-AM went on the air in October 1947. In 1959 WFRL was sold....from Vincent Barker (the guy who started the station) to Triad Radio somewhere in Michigan....Battle Creek, MI if memory serves me correctly.

In 1967 WELL-FM went on the air. The call letters stayed on 98.5 for 3 years. When WFRL/WELL-FM moved to the new high rise bank building in Freeport (1970), they changed the call letters to WFRL-FM.

The stations were sold to Bradford-Ross Associates in June 1977. WFRL simulcast on WFRL-FM until the fall of 1979 when the call letters changed to WXXQ and became an automated top 40 station while the AM went back to country.

WXXQ 98.5 moved it's studios to Rockford in 1996 and built a new tower closer to Rockford in 1998 and is running at reduced power while still being licensed to Freeport.
Posted by Greg at 10:47 AM No comments:

WLIZ was a Religious station licensed to Lake Worth, Florida from 1975 until the mid 1980s. The station first went on the air in 1959 and was owned by record producer Sam Phillips, best known for discovering Elvis Presley and signing him to his Sun Records label. Phillips named WLIZ for ELIZabeth Taylor because "she was the hottest female going in 1959." The station was run entirely by women, both on-the-air and management positions, something Phillips had tried previously at WHER in Memphis. The all-girl WLIZ played show tunes, ballads and light jazz but no rock and roll--odd given the fact that its owner played such a huge part in rock history. By 1988 the station had changed its calls to WLVS (W-ELViS?) Currently 1380 AM is a Regional Mexican station "Radio Fiesta" WWRF.
Posted by Greg at 9:57 PM No comments:

While packing up to move recently I came across an old issue of The Hard Report, a now-defunct radio trade magazine aimed at Rock and Alternative stations. This February 1994 issue features a dozen radio stickers on its cover: 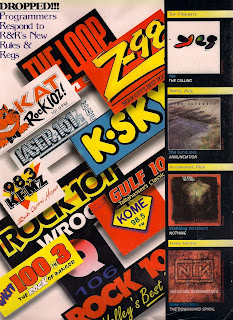 I have stickers from 10 out of these 12 stations. Here are a couple of decals from "Rock 101" WROQ which are slightly different than the one shown on the cover of The Hard Report. 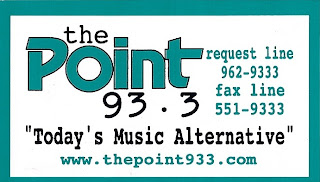 A magnet from Alternative "93.3 The Point" in Omaha, Nebraska. KTNP was licensed to Bennington, NE and is currently a Country station known as "Twister 93.3" KTWI. 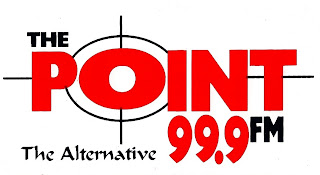 "99.9 The Point" KKPL is a Hot AC station from Cheyenne, Wyoming. Apparently they were a Modern Rock/Alternative station when I received this sticker in 2003. 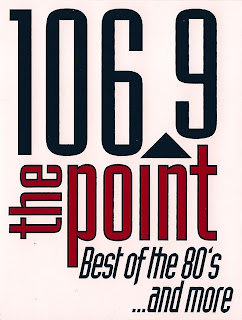 Ronnie James Dio died today of stomach cancer at age 67. Dio was the lead singer of Black Sabbath and Rainbow but I knew him best from 1980s solo output on albums like Holy Diver and The Last In Line. His powerful voice and trademark "devil horns" hand gesture ensure his place as a rock and roll legend.

WRIF is a Rock station from Detroit, Michigan. Previous WRIF stix can be seen here. And here.

Spent a fun evening at Great American Ballpark for the 2010 Civil Rights game. Quite a few big names were in attendance this year for an extensive pregame ceremony including Hank Aaron, Frank Robinson, Willie Mays, Ernie Banks, Billie Jean King, Harry Belafonte, Roberta Flack and Laila Ali. I was also overly excited to see the superhot Sage Steele from ESPN. With all these celebrities on hand the game was sure to be a letdown, right? Wrong! With two outs in the top of the ninth inning, the Cards were only down by one and had the tying run on first when Joe Mather shot a double into the left field corner. Skip Schumaker tried to score from first but was nailed at home by a diving Ramon Hernandez in a very close play to end the game. It was probably the most exciting game-ending play I've ever witnessed and screamed myself hoarse along with the rest of the sellout crowd. This brings the Reds to only a half game back of St. Louis in the National League Central Division.
Both teams wore 1947 throwback uniforms who's retro coolness were negated by most players insistence on wearing long, bunch-bottomed "pajama pants." Attention Major League Baseball: It is within your power to force players to wear their baseball uniform correctly. Nobody in 1947 wore these ridiculously long pants which often cover the cleats and reach the ground. This is how one wears not only a throwback uni but their everyday game pants as well. Thank you. 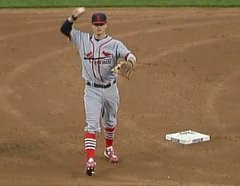 KZIM is a News/Talk station from Cape Girardeau, Missouri. A previous KZIM sticker can be seen here. 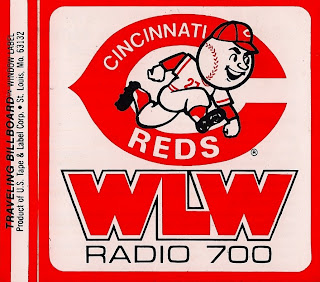 WLW is a News/Talk station from Cincinnati, Ohio and has carried Reds games since 1948. A previous WLW decal can be seen here. 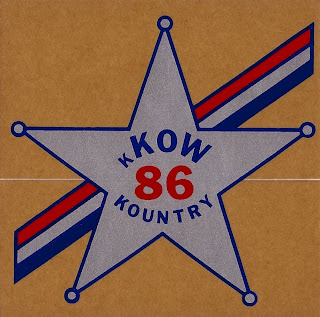 860 AM KKOW is a Classic Country station licensed to Pittsburg, Kansas.
Posted by Greg at 6:27 AM No comments:

KKON has been broadcasting from the KONa District of Hawaii since 1963. They carried an MOR format according to the 1979 Broadcasting Yearbook but is currently an ESPN Radio affiliate. KKON is licensed to Kealakekua, HI.
Posted by Greg at 9:51 AM No comments: 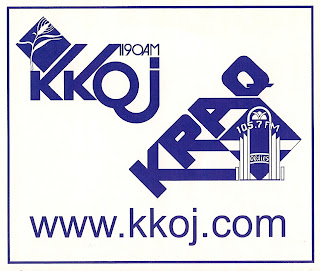 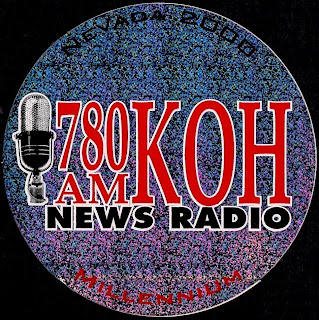 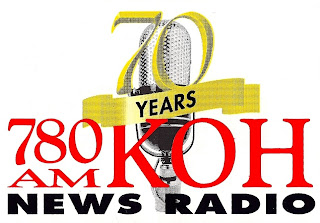 KKOH is a News/Talk station from Reno, Nevada. The station's history dates back to 1928 when the Federal Radio Commission issued the call letters KOH for broadcasting at 1370 AM (it was the last new station to be issued a three-letter call sign.) In 1931 they moved to 1380 AM and 8 years later moved again to 630 AM. An approval to increase their transmitting power required one more move, this time to their current location of 780 AM. They added a second K to their call letters in 1994.
Posted by Greg at 10:00 PM No comments: 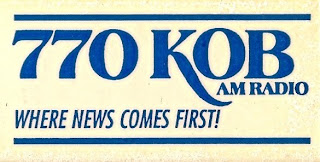 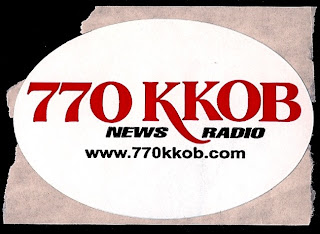 KOB has been broadcasting in Albuquerque, New Mexico since 1922. The New Mexico College of Agriculture and Mechanic Arts began broadcasting tests even earlier (1919) under the call letters 5XD. In 1986 the station added a second K to its call letters. KKOB "The Talk Monster" carries a News/Talk format.
Posted by Greg at 10:06 PM No comments: 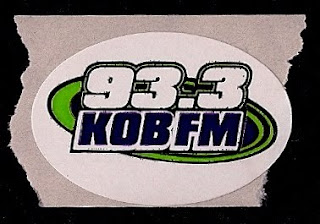 KKOB is a Top-40 station from Albuquerque, New Mexico.
Posted by Greg at 6:51 PM No comments: 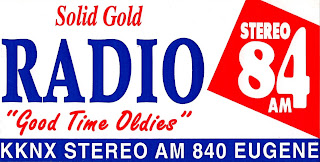 KKNX is an Oldies station licensed to Eugene, Oregon.
Posted by Greg at 6:14 AM No comments: 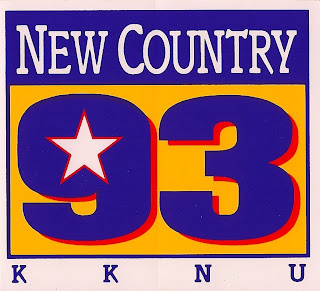 KKNU is a Country station licensed to Springfield, Oregon. They also operate 4 translator stations to extend their signal throughout the Eugene/Springfield area.
Posted by Greg at 6:10 AM No comments: 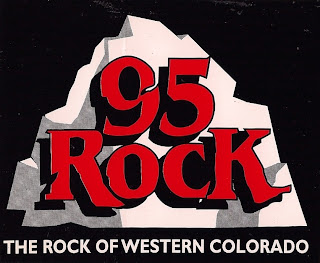 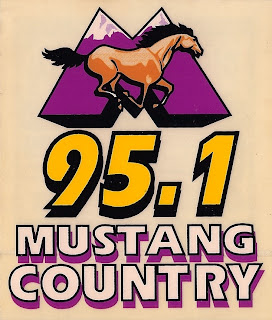 KKNN carried a Country format circa 1995.
Posted by Greg at 5:47 AM No comments: 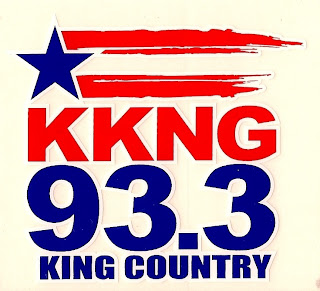 KKNG is a Classic Country station from Oklahoma City, Oklahoma located at 97.3 FM. These stickers are from when KKNG was down the dial at 93.3 FM and licensed to Newcastle, OK. 93.3 FM is currently home to KKNG's sister station, mainstream Country KJKE "Jake FM."

KNND AM was a short-lived Modern Rock station from Tucson, Arizona circa 1995. 1490 AM is currently an ESPN Radio affiliate KFFN "The Fan." 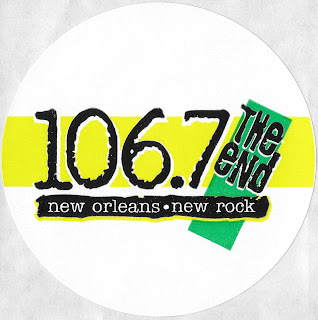