Arcan Radio went on the air in 1980 from Bilzen, Belgium.  They originally broadcast at 101.9 FM before eventually moving to 106.2 FM with their signal reaching both the Belgian and Dutch regions of Limburg.  A printing error seems to have blanked out the lower left corner of this sticker which reads "het bonkend hart van muzikaal limburg" (the pounding heart of musical Limburg).

"Rhema" in Greek literally means "utterance" or "thing said".  In Christianity it is used in reference to the concept of Rhematos Christou or Jesus Christ's sayings.  Radio Rhema began in 1974 in Christchurch, New Zealand although its roots go back to the 1960s when they were known as Gospel Radio Fellowship.  After multiple temporary licenses to broadcast (sometimes for one day only) they received a permanent license in 1978.  This made them the first Christian radio station in the British Commonwealth and one of the first in the world.  In the 1980s, they branched out to Australia which is where most of these Rhema stickers are from. 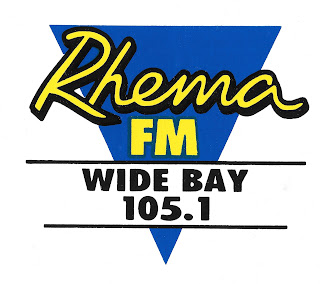 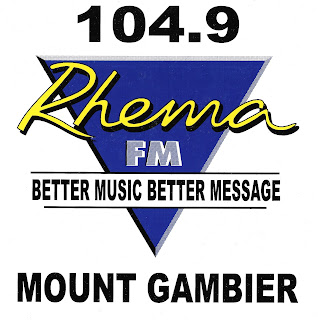 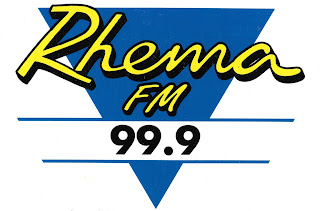 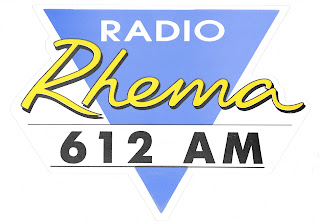 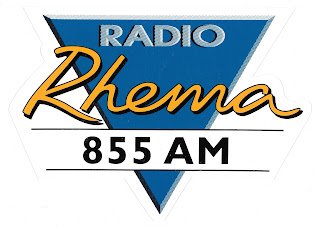 The above two Rhema stickers are from New Zealand.  Too lazy to research what cities they're from....anybody know?

UPDATE:  612 AM is in Christchurch and 855 is in Hamilton.  Thanks for the info Anonymous commenter!
Posted by Greg at 5:30 PM 2 comments:

WYAH is a 29-watt, LPFM station with a Religious format in Winchester, Kentucky. 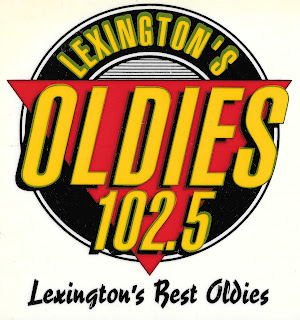 WLTO in (W) LexingTOn, Kentucky carried an Oldies format circa the late 1990s.  They currently broadcast Rhythmic Top-40 as "Hot 102".  WLTO is licensed to Nicholasville, KY.

97.3 WMEE is a Hot Adult Contemporary station in Fort Wayne, Indiana.  They carried a Top-40 format starting in 1979 and previously broadcast Beautiful Music as WMEF earlier that decade.  I used to listen to WMEE in the mid-to-late 1980s when I lived in Celina, Ohio and looked forward to the nightly "Smash It Or Trash It" rate-a-record bit.  For some reason, I still remember Thomas Dolby's "Hyperactive!" getting absolutely decimated by angry callers. 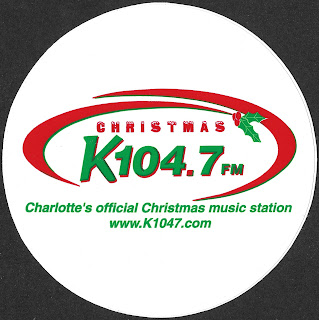 93.5 WHMI (W Heart of MIchigan) is a Classic Hits station licensed to Howell, MI.  They went on the air in 1977 to complement their now-silent sister station WHMI 1350 AM. 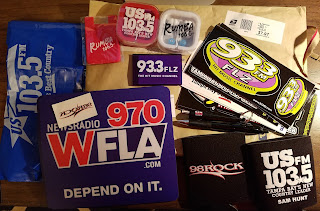 Just in time for Christmas, I received this great package from my pal Budd Yeman.  Budd works at iHeartMedia in Tampa, Florida (among other things) and sent a bunch of goodies from their cluster of stations.  Also check out his multiple tribute sites for stations past and present in Utica, New York.  Thanks again, Budd!

Formerly Classic Rock WTBT "Thunder 103.5", WFUS "US 103.5" is a Country station licensed to Gulfport, FL.  They are also the co-flagship station (along with WDAE) of the Tampa Bay Buccaneers.
Posted by Greg at 4:35 PM 1 comment: 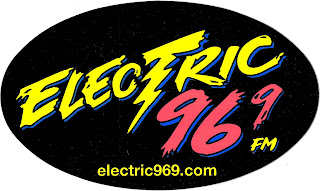 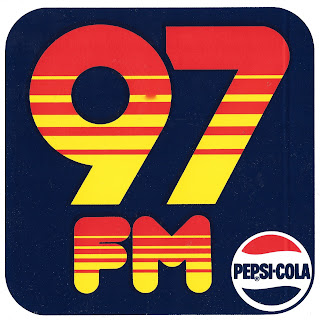 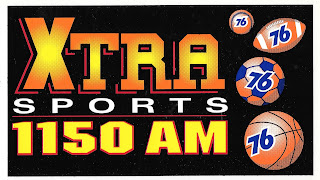 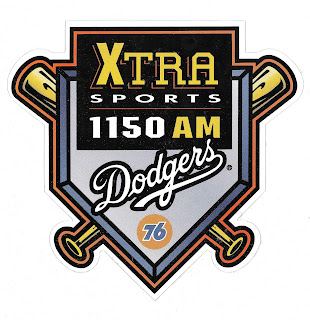 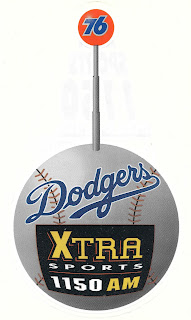 "XTRA Sports 1150 AM" was a Sports station in Los Angeles, California.  They were the flagship station for LA Dodgers games for a five year period in the late 1990s and early 2000s. 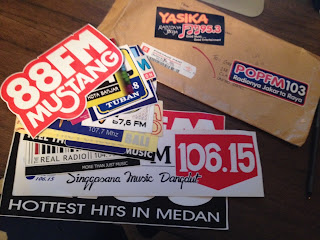 I recently received a batch of unique radio stickers from Indonesia.  Thanks Johannes! 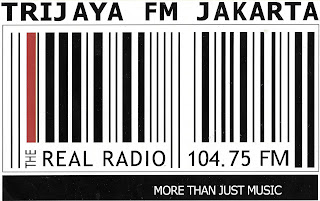 Trijaya FM began broadcasting from Jakarta in 1991.  They are now a full network of more than a dozen stations known as Sindo Trijaya FM.  The Jakarta frequency has shifted to 104.6 FM. 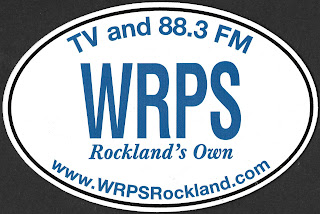 88.3 FM WRPS is operated by students and staff of Rockland High School in Rockland, Massachusetts.  The 105-watt station went on the air in February, 1974.  They play a mix of classic and current Modern Rock.

Los Angeles, California's 105.5 KNAC started out in the late 1960s as a free form station, playing typical album rock artists alongside San Francisco psychedelic music as well as R&B, Soul and Funk. By the late 1970s they had evolved into an Alternative music outlet with the onset of Punk and New Wave. This phase lasted until 1986 when KNAC turned to Heavy Metal and became one of the most iconic stations in the history of L.A. radio and a lifestyle for many of their diehard listeners.

KNAC's "Pure Rock" days coincided with Hard Rock and Heavy Metal at the peak of its Sunset Strip popularity.  They had a notoriously weak signal that somehow gave them a kind of underground credibility.  No form of metal went unplayed; Glam Metal, Speed Metal, Thrash, Progressive and Mainstream Metal all found space on the playlist.  KNAC was playing Metallica long before their breakthrough Black album in 1991.  "Mandatory Metallica" is still a fixture on Rock stations across the country but began at KNAC when a DJ named Poundin' Pat played rare Metallica tracks alongside album cuts.
I first saw the above sticker in the 1988 video for Bon Jovi's Bad Medicine.  Fans waiting in line for a Bon Jovi concert are wearing KNAC shirts and holding white-on-black decals which became ubiquitous for a time in the late 80s.

KNAC left terrestrial radio in 1995, just shy of a full decade on the air. They returned in 1998 with an online stream at KNAC.com

95.5 KLAQ is an Active Rock station in El Paso, Texas.

105.7 WROR plays Classic Hits in Boston, Massachusetts.  Their 23,000-watt signal transmits from the Prudential Tower and reaches as far north as southern New Hampshire and south to Providence, Rhode Island. 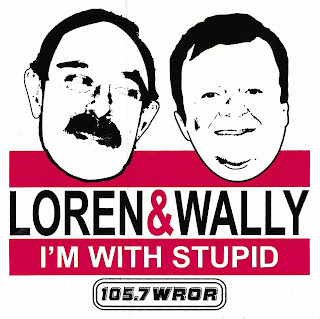 Loren and Wally have been on the air together since 1982 through multiple formats on 105.7 FM.  Wally Brine announced his retirement effective tomorrow, December 16th, 2016.

1590 AM WAKR is a News/Talk and Sports station in (W)AKRon, Ohio.  The 5,000-watt outlet went on the air in October, 1940.  In 1945, DJ Alan Freed joined WAKR and played a mix of hot jazz and pop.  A short move to Cleveland a few years later found him jocking the graveyard shift on WJW radio where he coined the term "Rock and Roll". 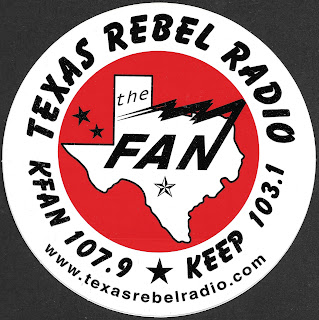 "Texas Rebel Radio" airs a mix Americana, Rock, Alt-Country, Blues and Folk with an emphasis on Texas bands and artists.  107.9 KFAN is licensed to Johnson City, TX and can also be heard on KEEP 103.1 licensed to Bandera, TX. 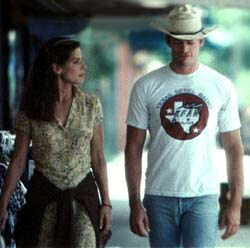 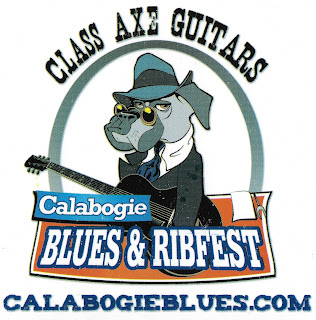 This Calabogie Blues & Ribfest sticker features the mascot from CIDG "101.9 Dawg FM" in Ottawa, Ontario.  They were on the air with a Blues/Blues-Rock format from June, 2010 until August, 2016.

WEDX "Evolution 101.7" was a Dance music station in Boston, Massachusetts.  They claimed to be the first EDM station in the country but the format didn't last long--about 18 months ending in June, 2014.  WEDX was licensed to Lynn, MA.  The "Evolution" transitioned to WXKS's HD2 channel.

Capital 88.7 was a national broadcaster on the island of Malta.  They were on the air from 1998 until 2009 and primarily played 80s pop music. 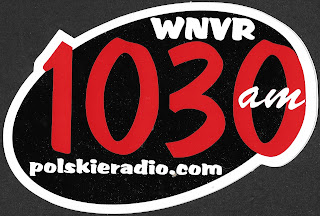