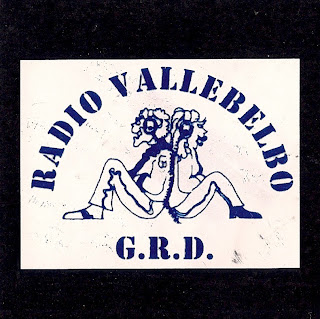 Radio Vallebelbo is located on nine different frequencies in northwestern Italy and based in Santo Stefano Belbo.
Posted by Greg at 7:29 PM No comments: 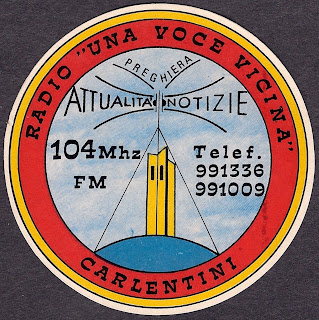 Radio Una Voce Vicina is a Religious station in Carlentini, Italy.
Posted by Greg at 8:40 PM No comments: 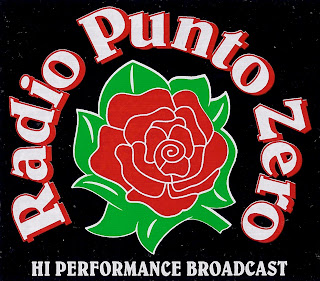 Radio Punto Zero went on the air in August, 1977, making it the longest-running station in Trieste, Italy.

Radio Margherita (Radio Daisy) is a nationwide network based in Palermo, Italy.  They play music from the 1960s to the present day, exclusively by Italian artists.  Radio Margherita is heard in almost every region of the country but their translators are concentrated in southern Italy.  They can be found on over 30 dial positions in Sicily alone.  The station slogan is "Italian Music Throughout Italy."
Posted by Greg at 3:33 PM No comments:

Radio Dei Navigli is an internet-only station based in Milan, Italy.  They began in the early 1980s under the name Delta Radio Barona and broadcast at 100.4 FM.  Navigli is a district in Milan known for its dining, nightlife and a series of ancient canals that run through the area. 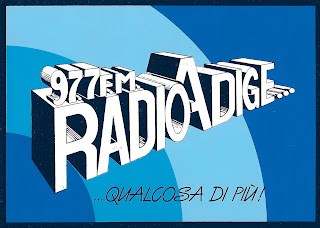 Radio Adige went on the air in Verona, Italy in 1976.  They play "great Italian and international music, from current hits to the greatest hits of the '60s" as well as news, sports and cultural programming.  Radio Adige (Radio South Tyrol) broadcasts on four different frequencies in the area around Verona which is in northern Italy.  "Qualcosa di più" translates to "Something more." 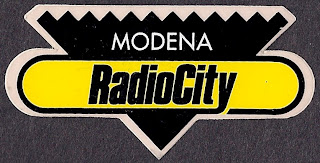 Modena RadioCity broadcasts on multiple frequencies from Modena, Italy in the north/central part of the country.
Before moving to nearby Maranello in the 1940s, Modena was the home to the Ferrari automotive company.  One of their models, the 360 Modena, was named after the town and one of the color choices of Ferrari is Modena Yellow (which looks suspiciously similar to the yellow on this sticker.) 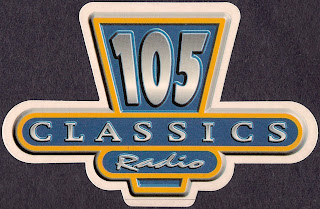 The back of this sticker says that 105 Classics Radio broadcasts at 89.500 in Milano, Italy.
Posted by Greg at 8:57 PM No comments: 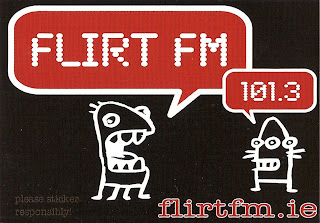 Flirt FM 101.3 is the campus radio station at the National University of Ireland in Galway.  They went on the air in 1995 and are run by around 150 volunteers and two paid staff members. 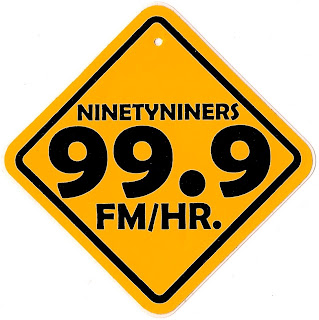 99ers "The One and Only Funky-Funky Station" broadcasts at 100 FM in Bandung, Indonesia and at 99.9 FM in Jakarta. 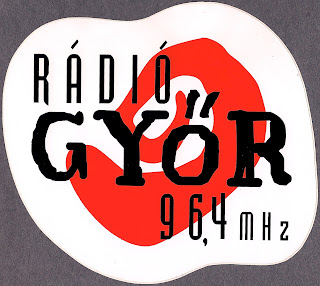 Not much information can be found about this station other than that they broadcast from the city of Győr in northwest Hungary.  This Wikipedia Magyar article on Radio 1 claims that the 96.4 frequency in Győr was terminated because "the license expired, withdrawn their application." 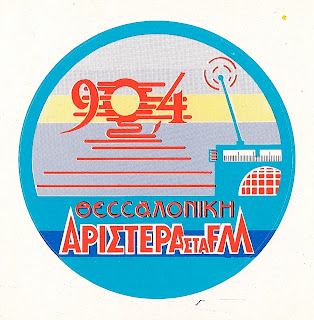 Aristera Sta FM is a Communist Party-owned station in Thessaloniki, Greece.  They now broadcast at 90.2 FM.
Posted by Greg at 8:18 PM No comments: 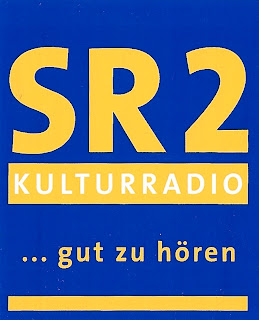 SR 2 Kulturradio plays Classical and Jazz music along with cultural programming including radio plays, politics, world events and children's shows.  They are based in Saarbrücken, Germany and are part of the Saarland Radio network of stations. 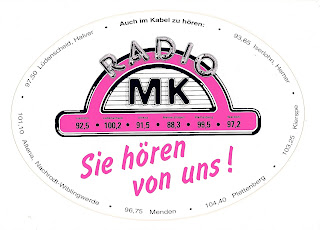 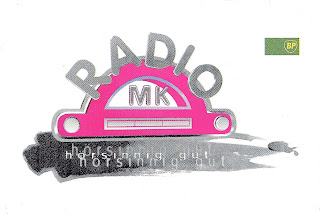 Radio MK went on the air in 1990 from the district town of Iserlohn in western Germany.  They appear to broadcast a gold-based hits/Adult Contemporary format on more than a dozen frequencies in the Maerkischer Kreis area of the country. 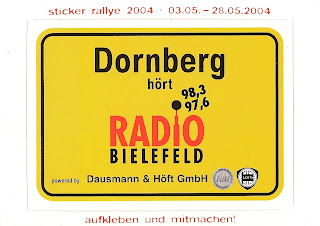 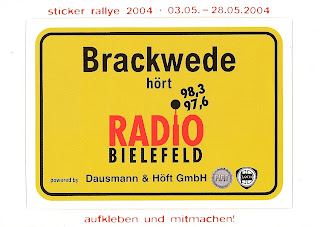 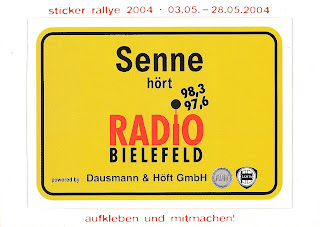 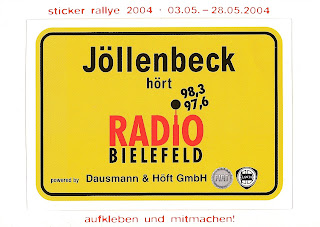 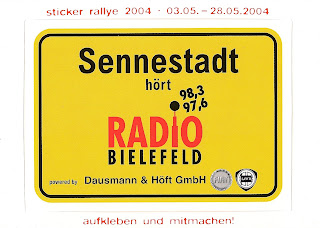 Radio Bielefeld is a private, local broadcaster based in Bielefeld, Germany.  Dornberg, Brackwede, Senne, Jöllenbeck and Sennestadt are all local areas or city-districts within Bielefeld.  This decal set was part of a 2004 "stick it and win" contest.

KSUI plays Classical music in Iowa City, Iowa.  The station is owned by the University of Iowa and is the flagship station of Iowa Public Radio's classical music network.

1370 KSUM went on the air on New Year's Eve 1948 in the southern Minnesota city of Fairmont.  They play Country music along with local news, weather, University of Minnesota sports and Minnesota Wild hockey.  KSUM provides a particular focus on agriculture--their current logo incorporates an ear of corn in their call letters--and the station even has a full-time Farm Director. 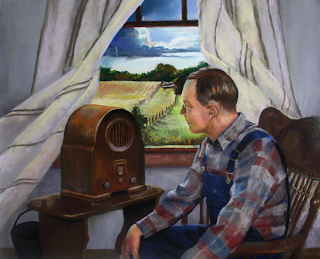 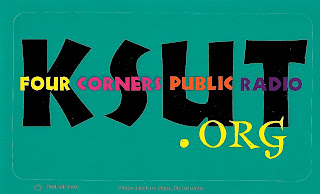 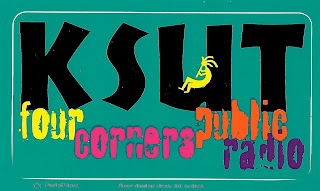 KSUT (K Southern Ute Tribe) is a non-commercial, public radio station located at 91.3 FM in Ignacio, Colorado.  They first went on the air in 1976 with 10 watts and programming to serve the Southern Ute Indian Reservation including Ute language and cultural shows and Native American music.  After a signal strength increase in the mid-1980s, KSUT evolved into a more traditional public radio station, joining NPR and becoming known as Four Corners Public Radio (the 4 corners being the geographic point where Utah, New Mexico, Colorado and Arizona meet.)  In the late 1990s they split their program stream so that 4CPR continued to serve the larger regional audience while "Southern Ute Tribal Radio" went back to serving the local Native American population. 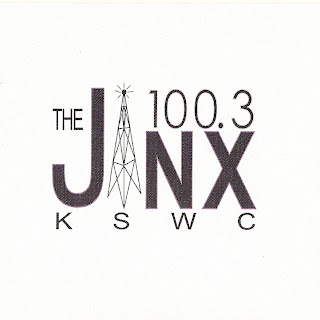 KSWC "100.3 The Jinx" is a 10-watt, student-run CHR station from Southwestern College in Winfield, Kansas.  "The Jinx" is pretty unique as far as radio station brandings go.  Anybody know how/why they got this name? 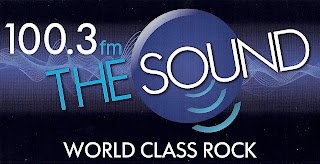 KSWD "100.3 The Sound" is a Classic Rock station in Los Angeles, California.  Formerly an Urban Adult Contemporary station known as "V100" KRBV, the 100.3 frequency flipped to an Adult Album Alternative format in 2008 and has since (d)evolved into their current Classic Rock format.

"100.5 The Wolf" is a Country music station licensed to Aurora, Missouri. 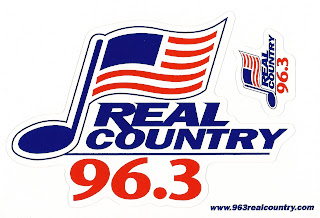 96.3 KSWG is a Country station licensed to Wickenburg, Arizona near Phoenix.  At least part of their programming is supplied by Cumulus Media's satellite-fed "Real Country" format. 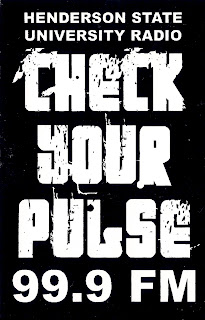 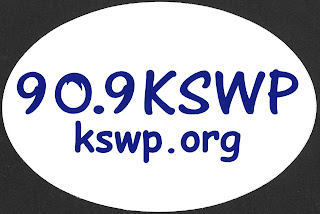 KSXE "Sexy 106.3" was a Top-40 station licensed to Kingsburg, California circa 2007.  An ownership change brought about new KVPW call letters and they became "Power 106."  The frequency is currently an affiliate of Air1 Radio and carries a Contemporary Christian format.

Two early 1980s stickers from KSXO ("K-Six-O") a Top-40 station in Redding, California.  By the mid-1980s KSXO ceased to exist and the frequency went dark.

99.9 KSXX "La Super X" was a Regional Mexican station licensed to Marysville, California from 1994 to 1997.  The frequency still carries the same format but is now KRCX "La Tricolor 99.9" 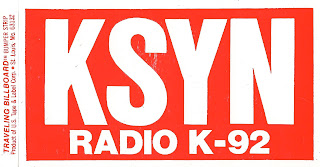 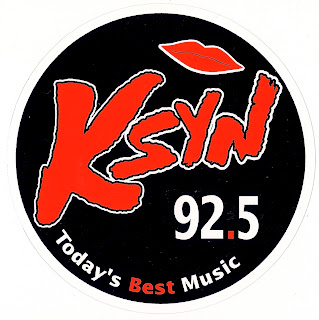