WXKE is a Classic Rock station in Ft. Wayne, Indiana. They signed on in 1976 as "Album 104" and was the rock station of choice when I lived in west central Ohio. The sticker shows the distinctive Flying V guitar which I thought came about in the 1980s with people like Zakk Wylde and the Scorpions but which actually dates back to 1958 and the first model manufactured by Gibson. Here's Hendrix himself playing a Flying V. 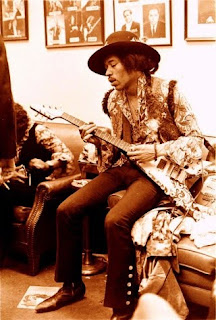 If you send a me a mailing address, I'll send you the latest ROCK 104 Sticker. Scott@SummitCityRadio.com